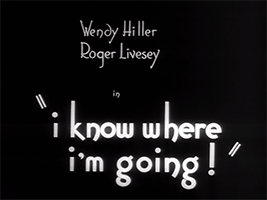 written and directed by Michael Powell and Emeric Pressburger

No trailer seems to be available anywhere; in its place Criterion has just uploaded the above scene. So that’ll have to do.

Another peculiar Michael Powell joint, this time in black and white. A romantic comedy with almost no comedy and very little romance. Wendy Hiller sets off toward a remote Hebridean island to marry a rich businessman — never seen — but her last little ferry ride is delayed for days due to inclement weather, and while waiting it out on the remote-Hebridean-island-but-one, she’s seduced by the realities of the land and the people and Roger Livesey. After putting up a desperate but futile fight against her inner desires, she finally accepts that she wants so much more from life than to marry a rich offscreen businessman: she wants to be with the guy who’s actually been in the movie with her. Fin.

That summary makes it sound like an entirely reasonable movie, but, as usual, in the execution, Powell’s impulses are eccentric. (Eccentricity being relative, this is to say that he’s eccentric to me.)

The opening titles and our heroine’s initial train journey north are both put across with lively whimsy and cinematic puns — production credits are painted on the side of a passing milk delivery cart; a top hat seems to puff smoke as it crossfades to a train engine, et cetera. But once we arrive at the scene of the action, all that quirky charm flies away, for good, and Powell and Pressburger become intent almost exclusively on capturing “atmosphere,” something vague and homely and enveloping. They do okay. But they never really show how that atmosphere engenders any particular thought or emotion, how it constitutes a movie. We either feel its significance or we don’t, I guess according to how much we internally resemble Wendy Hiller’s character. She’s seen partaking in what looks like anodyne disinterested tourism to kill the time… and then subsequently in her hotel room, wringing her hands about having her life completely turned upside down by it all. If you say so!

This is Hiller’s second and final Criterion appearance. As in Pygmalion, she makes a admirably forceful impression, but owing to the way the movie is put together, the character isn’t entirely accessible to the audience. And the significance of Roger Livesey as a screen presence I must admit I don’t really understand. Some sort of a… fellow? With hair? To put their two unusual faces on screen together feels almost rebelliously un-Hollywood. Who are these people??

Who are these people and why didn’t we ever get to see them actually fall for each other? Did they fall for each other, really? If so, why? Isn’t that what the movie is about? Did I miss that scene? It’s all by implication, of course, and then the implication itself is by implication. The scenario determines the emotions, in a movie that is, not coincidentally, about the experience of one’s scenario determining one’s emotions. So it makes a kind of internal sense, but it’s intrinsically static. Stasis and preordination can be dreamy, and I can sort of imagine this film having a misty dreamlike effect, for those who are primed and susceptible. As I said last time: perhaps it benefits from repeat viewings, as it becomes less of a drama and more of a pattern. It seems to me to have been a mere pattern from the outset.

I note thematic similarities to Black Narcissus — a scenic location draws out repressed desires and eats away at the self-deceptions of propriety. Peeping Tom and The Red Shoes are also both more or less about the inner life emerging to disrupt the outer life. But Powell personally seems to have spent his life remarkably unfettered, freely pursuing pretty much everything that interested him, both artistically and romantically. So it’s not clear to me what these repressed desires were that he was constantly trying to work out. Maybe it’s just an English thing. These are exceptionally English movies, after all; maybe they only truly make emotional sense if you’ve grown up instilled with English social instincts.

Tilda Swinton, for example, says it’s her favorite movie, which sounds about right. An eminently unrepressed person, who nonetheless is (perhaps) inwardly in constant renegotiation with conventional societal repressions. I guess to be a free-spirited Brit feels like being in a Powell & Pressburger movie; one constantly has the sensation of being strangely exaggerated.

Finlay Currie from Great Expectations is in there too. Pamela Brown makes a conspicuously striking impression in a role where it’s hard to justify — another of the Powell’s many sometime relationships revealed on screen. And as the prim little rich girl: Petula Clark!

Two bonus features are on the DVD but aren’t currently on FilmStruck: “audio essay by film historian Ian Christie” and “the 1994 documentary I Know Where I’m Going! Revisited, by Mark Cousins,” but I managed to find the latter on YouTube, so I feel I’ve done pretty well with this one. There’s also some home movies of Michael Powell going on pleasure walks in the Scottish highlands, a scene from Powell’s earlier Scottish isle movie The Edge of the World — now available on FilmStruck in its entirety but from this excerpt I’m not really tempted — a slideshow of travel photos taken by Nancy Franklin, New Yorker critic, who seems very willing to stand up and be counted as this movie’s biggest fan — she appears in the Cousins piece, too. And then a few on-set photographs. As with most Criterion discs, the main thing it all gets across is that some people, somewhere, do in fact care a lot about this movie. I’m always affected by that sort of thing! Hey, these people seem nice enough, and look how much they like the movie; maybe I like it too!

Sure, maybe I do. Why not. But not enough to write about it anymore.

Oh right except for the music paragraph. Music is by “Allan Gray,” which is just another way of saying Józef Żmigrod. It has a few inspired touches and a few blatant miscalculations; on average I’d say it’s a bit obvious and old-fashioned. But if you’re in a misty dream maybe that’s plenty. Consider the clip embedded at the top of the page; maybe anything more dramatically precise would break the spell, assuming you ever fell under a spell in the first place.

Finding a piece to listen to was a little tricky; the opening titles have narration over them so that’s no good, and the end titles are an arrangement of the folk song from whence the film takes its name, which besides being a vocal seems insufficiently attributable to Allan Gray. In the course of the movie there are no musical showpieces that stand in the clear, so I’ve had to cheat a bit: this is the climax of the penultimate scene, when the leads kiss farewell (wink!) to the main theme of the score — it may not be the actual start of the cue but let’s pretend it is — and then to fill out the clip I’ve included the cue that immediately follows, the Scottish-ish tune that corresponds to “the cursed castle” (see below).

(Hey do you hear that, toward the end there? Sounds like maybe a woman’s voice got half-juxtaposed into the music somehow? Maybe the magnetic tape was stored badly, or some wires were touching when it was duplicated, or something? Well, I just double checked, and that’s in the movie.) 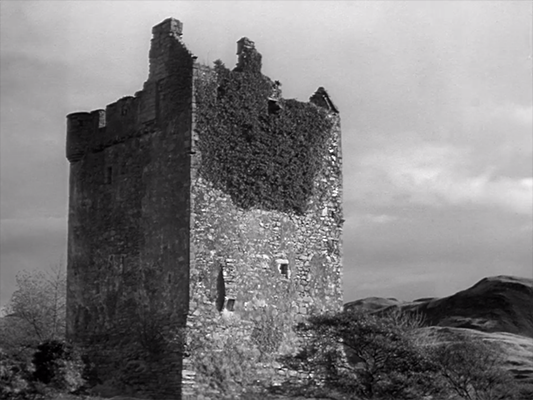