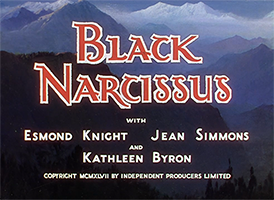 A complete triumph of production and craft, in service of an oddity. That seems to be Michael Powell’s thing.

This is absolutely peak Technicolor, as good as color has ever looked in any film. Startlingly good. As good as Disney — which Martin Scorsese, on the commentary, points out as an influence. He says that when he saw it in a theater in the 80s, on a certain hard cut to brilliantly colored flowers, the audience actually gasped. I think I might have made some noise there too.

The painterly composition and palette control, the sensitive editing and music, the incredibly lush and precise matte paintings, the sets and costumes, on and on. The acting, even! All exquisite. An all-time beaut. One for the showroom floor.

And this is all to give us… what? A weird psychological drama about how nuns in the Himalayas have a harder time than usual resisting the call of the sensual. Why?

Not just “why,” in fact: I don’t even think the premise makes any sense. One of the nuns says something about how her devotion to her vows has been disturbed because of the view: “you can see too far.” That’s not how it works! When people are surrounded on all sides by purple mountain majesties they are more than ever inclined to think lofty spiritual thoughts. The idea of a monastery on a remote mountaintop is a cliche! Yet here we’re supposed to see it from the start as some kind of recipe for sexual disaster. How bizarre.

There’s almost an idea there that would make sense to me: that giving up one’s worldly life is actually dependent on pushing back against it, and when it recedes to the other side of the earth where it can no longer provide resistance, one is disconcertingly free to think about what one actually wants. But for that to be the point, this mountaintop convent would need to be depicted as a place where, indeed, the meditative peace is too complete. And that’s not how this movie plays it. Instead, it keeps reminding us that the palace they’re living in used to be a harem, and fills the space with earthy local characters who provide sensual distractions. The Himalayas, land of worldly temptation, is the idea. Pretty weird idea.

The distractions primarily take the form of David Farrar hanging around in tiny shorts. Sometimes shirtless too. Powell says several times on the commentary that Farrar had the goods to be a major star, he just didn’t want to be one — and that he was the kind of person who was pleased with himself for being disinterested in fame. That I think is also what gives him his star quality in the first place: that there is no career occupying the back of his mind and weighing him down. Just the charisma of purest self-satisfaction.

Meanwhile Jean Simmons as “sexy Indian teenager who never speaks” is problematic, not just for reasons of ethnicity — but, you know, for those reasons too. The movie is too peculiar to accuse of any clear colonial or racial arrogance; if you do the math it probably could be worked out as a fairly self-critical depiction of English people in parts of the world that aren’t properly theirs, produced in the year of Indian independence. That’s the case made by one of the essays in the Criterion package. But ultimately it’s all too weird and personal to take it as having conscious or coherent political ideas — it’s all psychological first and last — so I tried to simply ignore the crazy race-deaf casting. As best I could.

Deborah Kerr and Kathleen Byron look rather similar, especially when en-habited down to just their faces. I assumed the casting was meant to create a deliberate doppelgänger effect, as they come into conflict. Then I read that they were, respectively, Michael Powell’s ex- and current girlfriends. So… I guess Freud would say I was right? Maybe that bit of trivia accounts for the whole movie, in fact. In terms of explanation I’ll take what I can get. Both women do an excellent job, by the way. When Byron emerges as a screen-chewing force toward the end, it’s electrifying.

Basically we have here exactly the same creative DNA as The Red Shoes and the same screwy dramatic effect of obscurely motivated fervor. I certainly appreciate intensity for its own sake, even when I really can’t say where it’s coming from or where it’s going. That said, knowing where it’s going is always preferable. (Hopefully the next movie on the list knows where it’s going.)

Really, what was Powell’s deal? This is the guy who went on to make Peeping Tom. He was working things out through art that aren’t my things, and I continue to wonder whose they are. An extremely talented craftsman but I’m getting the sense that his psychological eccentricities put limitations on the work. On the other hand, the strong impact of the local effects — including some powerfully emotional ones, like the flashbacks here — is almost enough to carry one through. It’s the kind of stuff that improves on repeat viewings, when the overall pattern becomes a house to live in and take for granted. The crookedness only shows from outside; inside one can just enjoy all the wonderful furniture.

I wonder how much the original book jacket painting (by one Roland Cosimini) might have had to do with Powell and Pressburger’s enthusiasm for this material in the first place.

Commentary by Powell and Scorsese (recorded 1988) is fine — both are always interesting company. Scorsese points out shots and concepts that he stole for his own movies (i.e. “I did a whole sequence of that kind of shot in The Color of Money“), which, as it did with The Red Shoes, fascinates me for its dramatic incongruity: Marty Scorsese is obsessed with this nun movie? But his enthusiasm kind of points out why we don’t have to care much about the subject matter to be stirred by the craftsmanship. And I appreciated the encouragement in that direction.

I watched on FilmStruck, which lacks one of the three video pieces listed as being on the DVD, a 24-minute general behind-the-scenes documentary. Sounds interesting but, really, what can I do? This is the new reality. I’m sorry everyone, but I’m settling for what I can get with my subscription.

I got an 8-minute piece by Bertrand Tavernier about the movie — fine — and then a 17-minute interview with same. Since Tavernier is basically just speaking as a friend of Powell’s and an admirer of the movie, this is entirely a secondhand report, a little like listening to someone describe what they learned from the bonus features on a different, superior edition of the DVD. But he tells it well enough.

And then there’s this pretty-interesting piece about director of photography Jack Cardiff and the whole apparatus surrounding Technicolor. My main takeaway was that Cardiff made the color look so good because he was intimately familiar with the entire Technicolor process, so his thought processes extended all the way down to the technical roots — whereas cameramen who tried to just treat Technicolor as a consumer-ready tool — which of course is something the Technicolor Corp. was happy to sell it as — ended up using it to much feebler effect. This is the way with technology generally: it solves a problem but only in its own particular way, so the end-user is never really free to think beyond the original problem. Unfortunately computer technologies are now just too complex for the creatives to fully understand what they’re dealing with or why. That remains the burden on CGI and probably always will: the tool is too mysterious to be wielded with deep intuition. It has to be managed. (Cardiff talks a bit about how the usual Technicolor process was for Natalie Kalmus to show up on set and boss everyone around.)

As usual, watching a second time and then watching bonus features makes the movie seem more and more worthy. Yes, Scorsese is right, this is something “special” — his favorite word — so why, really, am I griping about its being weird? Heck, maybe it’s one of the greatest movies of all time! It certainly seems to have been influential — on special effects, not least. And I could swear I saw images from later Hitchcock in there. (Surely this is where the nun at the end of Vertigo is running in from.)

Basically, it’s a clear masterpiece of some sort — but only of that sort.

Again Brian Easdale delivers an extremely British score with upscale concert-hall manners. I find this sort of thing engaging just on its surface — hey, it sounds almost like “classical” music — and then beyond that, this is actually quite a well-scored movie. The use of chorus to represent things sensual is really strong — he brings it in to powerful effect at four or five different points in the movie; each entrance got me good.

The climactic sequence, when the action becomes more or less a horror movie, was apparently composed musically before shooting, and then filmed to match — but the music in question doesn’t take center stage; it’s still pure underscore, so the effect is less one of balletic synchrony than it is simply of consistently measured pacing. I guess P & P needed a metronome to keep them steady enough to be scary. Anyway, it worked. But there’s too much dialogue and sound and screaming and whatnot to use that as our excerpt, so instead we’re just going with the Main Title, which isn’t necessarily the most distinctive achievement here, it’s just the one in the clear. (Those are some onscreen Tibetan longhorns being blown at the start.) 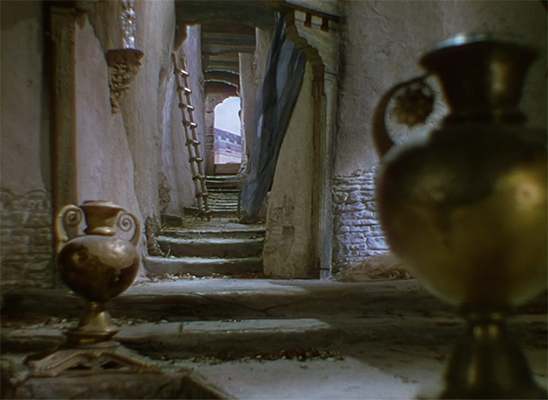