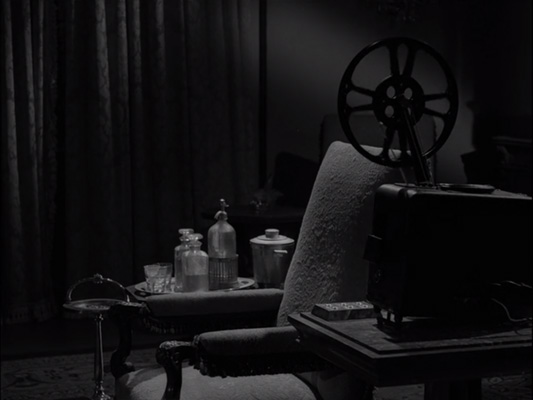 Watch it on Netflix.

The first of two consecutive memory-phobic episodes. This one starts out condemning nostalgia but in the end switches to granting it an eerie transcendence; the next episode will sell us the exact reverse. The reason they’re able to coexist inside the same writer (and audience) is because nervous ambivalence is the only real thing being expressed. The specific narratives just reshuffle the same mixed deck into different orders.

But let me try to do the math the right way forward this time. What do we, the audience, experience?

Well, we know that we’re in The Twilight Zone, so from the very beginning we get that Barbara’s obsessive personality is ominous. We know the playbook: when people obsess too much, reality eventually buckles at the seams. So something psychotic is going to happen to the fabric of her world — it’s not hard to guess what — and we dread it… but we also look forward to it; it’s going to be the thrilling payoff.

Nobody wants to have a psychotic break, because it’s so intensely alienating (“Where Is Everybody?”), but nonetheless we feel a nervous eagerness to experience one vicariously, safe from any social consequence. Whenever a movie launches into a crazy dream sequence, that’s when our senses really light up. So we’re all rooting for Barbara to go nuts enough that we get to see something fantastical (-but-unfortunate).

Our public morality is represented onscreen by Martin Balsam as her supposedly constructive rationalist friend (and admirer?) Danny. “You do this every day. Honey, that’s sick; that is really sick,” he tells her, just to be helpful. When she happily announces, “it was a carefree world, Danny, and I’m gonna make it that way again!” he grabs her by the arm in a fit of horror: “You can’t! It’s nostalgic, it’s nice, but it’s not true — it’s phony!”

Jeez, what is he so worked up about? After all it’s not his sanity that’s on the line. Or is it? The producer, too, feels somehow threatened, such that he’s compelled to shout at her angrily, despite having the upper hand in every way. And Sally the maid seems downright terrified long before anything supernatural happens.

I think it’s because they all sense that their realities are vulnerable to buckling, too, just by their proximity to her. Rationality is constructed socially, and Barbara is fiercely determined to change everything she touches to suit her ideal. The people around her realize that they need to defend against her will because it is genuinely potent! And so do we, the audience. Our fear of being considered delusional is what’s being triggered here, and what’s scary is not projecting ourselves on to her, but on to a friend who has to hold up against her mental contagion. “Oh god, if we ever dared give in to her agenda of nostalgia, we’d be doomed! Doomed to a life of ostracism from sane society!”

But! In the end, after she’s done a magical vanishing act, Danny is suddenly relieved of all such phobia, and maybe so are we. Now that we’re no longer under the threat of her social influence, our suppressed sympathy is free to come out for a sentimental airing. Ah, don’t we all want what she wanted, deep down? “To wishes, Barbie.”

Oh, sure, now you’ll admit it. Who will help me eat the bread?

Her final gesture is, appropriately, a serenely contemptuous goodbye kiss, to all us naysayers, all the uptight scaredy-cats who weren’t willing to go along for the ride and fess up to our inner feelings: that time is an illusion, and romance isn’t.

Even Rod, who at the beginning of the episode said rather smarmily that she had been “struck down by hit-and-run years,” now jumps on the bandwagon:

To the wishes that come true.
To the strange mystic strength of the human animal, who can take a wishful dream and give it a dimension of its own.
…
It can happen… in The Twilight Zone.

But as always, each viewer gets to choose for himself how to take it. Is this toast to the sanity-bending power of the human will sincere, or is it haunted house irony, a toast to goblins and demons? The show works either way — you can be afraid of either half. Or a little bit afraid of both.

Psychological ambivalence here also takes the specific form of ambivalence about movies and their appeal. In its own goofy way, the episode enacts the standard Hollywood soul-search arc: “What are we doing wasting our time with these stupid phony stories? … Hey y’know, in their crazy way, movies aren’t phony at all, they get at what’s best about people.” We all know that tune.

The episode is also about our tortured feelings specifically about actors. Barbara’s “sick” inclination to give voice to her fantasies is, after all, the life force that gives all actors their talent, their skill, their value. They have something to offer because of their willingness to be the source of their own emotional truth. The public loves and condemns its stars with such fervor because they’re professional personifications of the parts of ourselves that we strive so hard, and so painfully, to suppress.

I feel bad for the “aging diva” archetype exactly because she’s treated like an archetype. Even the sacramental adoration of drag queens et al. is a way of denying such people their essential normality. They’re just people; their desires and fears are perfectly ordinary.

The scarf appearing on the floor at the end of the episode is a classic “tangible confirmation,” even though its being there is really no more magical than her appearance on the screen (in fact it’s far less magical, since of course her scarf is in her house). But we need it as confirmation, because we’ve built up a suspicious bias against anything associated with movies. Only when Danny sees the scarf and realizes that she hasn’t just gone into “a film” (egad! how ghoulish!) but has in fact gone bodily into another reality where everything is great, only then does he realize that this might actually be a kind of happy ending.

Yeah, I know, the obvious thing to talk about with this episode is of course image vs. reality, celluloid dreams and the flickering light of the projector and all that. Since that’s the centerpiece. But it seems pretty self-explanatory to me. Film fantasy is a mere image; when she chooses her private fantasy over the social reality, she becomes mere image to everyone else… and yet, as the scarf reminds us, the distinction between image and reality is perhaps itself an illusion… etc.

As for my game of clocking the moment of turnaround, in this case I’m going to say it comes when Barbara bids Danny goodbye — the calm authority of her new demeanor is, in a sense, the twist. That puts us at just around 22 of 25 minutes, or 88/12.

In talking about stories like this one, I always want to refer to “The Coronation of Mr. Thomas Shap,” a very short tale by Lord Dunsany, but it’s not as well known as I want it to be. To me it feels like the general archetype of which other such stories are subvariants (or inversions). So there’s the link; everyone go read it so that I can invoke it next time it applies. It applies most of the time on The Twilight Zone.

(You know, I may already have linked to this story some years ago and so maybe you’ve already read it. I’ve posted a lot of stuff here; I don’t remember it all.)

The dialogue in the old movie she’s watching at the very beginning elegantly hints at an emotional parallel between the sublimation of the inner self into cinematic nostalgia — the theme of the episode — with the Hays Code sublimation of sex into lines like: “I shall have a memory of you for my eyes, thoughts of you for my mind, and the touch of you for all of me.” All while serving the immediate function of evoking the bygone sounds of 1933 schlock. This bit of pastiche is, I think, a high point for Rod Serling’s dialogue writing thus far.

While I’m on the subject of the movie she’s watching: the episode is built around the painful absoluteness, the bitter undeniability, of the fact that a 40-something is, alas, objectively another kind of being entirely from a 20-something … and yet of course it cheerfully gives us the same 41-year-old Ida Lupino playing “young Barbara,” too, looking basically the same at both ages. I didn’t really detect any winking about this meta- irony, but given that the episode ends with Barbara vindicated, there’s certainly room to imagine it there.

“The Sixteen-Millimeter Shrine” is a clunky title, but at least it’s better than Serling’s working title, “Shmunset Shmoulevard.”

Extra credit: compare and contrast this ending with the ending of The Shining.

This one has our second original score, by golden-age great Franz Waxman, who like Ida Lupino and director Mitchell Leisen was an authentic recruit from the Hollywood era under discussion — and perhaps more to the point, had composed the score for the actual Sunset Boulevard. Lest there be any doubt remaining about Rod’s intentions!

I love the bitonal effects Waxman uses to spook up the climax, when Barbara makes her ghostly appearance. There’s moderately uneasy music earlier when she’s announcing her plans to wish herself into the past, but he really saves up the true Twilight Zone dizziness for the big moment, and it’s very effective. Just the opposite of Bernard Herrmann’s usual approach, which is to subtly lay the groundwork at the beginning so that whatever arrives later feels inevitable. Both ways can work.