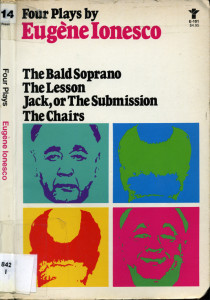 I think I could direct this one pretty well. Clarification: In my experiences observing theatrical directors I’ve learned that directing is 10% imagining how things should go, 70% dealing with people to try to get things to go that way, and 20% coming to terms with what ends up happening instead. When I say I could direct this one pretty well, I just mean the first 10%, the fun part. I guess I really mean that I could imagine this one pretty well. And I did. I imagined real performances, and blocking and lighting and sound and everything. I put on a good show in my head.

I was able to do this while “sight-reading,” as it were, because this show is pure nonsense. I didn’t need to know where it was going because the construction is musical and self-generating. It has no rational arc or goal-oriented forces. It is simply in formal motion. It spools out. That’s not to say that it was written that way; it functions improvisationally but it surely required careful editing and shaping to maintain that impression.

To refer to the brain hemispheres again (I know, I need a better terminology for this), this one was for R. Some might even say that the play is R thumbing its nose at L – that’s more or less the index card version of Ionesco – but to my mind, R just doesn’t have any reason to thumb its nose. Nonsense is its own impregnable kingdom. It has no enemies.

R says: this is like a full one-act’s worth of Exploding Penguin Sketch. Or any other Monty Python bit with the shrill housewives (“pepperpots”) whining absurdities. It might be interesting to work out a chain of historical influence that encompasses both Ionesco and Monty Python — or not. Or the ahistoricity of absurdity. Or something. Might be interesting… for L! For my part I just think it’s great to see people sitting in a room saying things to each other BUT SILLY.

The premise here is the stilted, inane world of the “Thank you, my name is Mr. Smith” sample sentences in language courses. That’s plenty premise for me!

The more important reason that kids are delighted when adults are silly is because adults aren’t generally silly. To stage a play that says, deadpan, “It’s pretty silly to put on a play, isn’t it? BANANA!” offers the audience a similar gift: the acknowledgment of shared innocence, which is to say shared absurdity. Isn’t that why nerds love Monty Python, ultimately? Because the cruel intricacies of social interaction are being openly acknowledged — by people with British (i.e. grown-up) accents, no less — to be a senseless charade, a kangaroo in the refrigerator.

(Nerds, of course, no longer need Monty Python these days — and I get the impression Monty’s remarkably long prominence is finally in real decline — because internet interaction offers an RPG-style escape into the discrete, away from all that bewildering nudge-nudge R-style business of face-to-faceism. Nobody wants reassuring satire about something they are already committed to eliminating from their lives. You got 19 likes! Level up! With friends like these, how could the dead parrot sketch possibly ease anyone’s pain? Face-to-faceism’s sins are so quaint and human compared to the Brazil of Facebook; I feel like talking to that mild and personable pet shop owner would be a rare and relaxing pleasure. Who isn’t pinin’ for the fjords?)

Okay, now go back to before the parenthetical and get ready to pick back up from where we were.

So: It seemed clear to me that Ionesco was up to the same sort of thing. Toward the beginning there is a prolonged sequence of Mr. and Mrs. Martin realizing the exceedingly obvious with surprise, an inch at a time. When the scene finally reaches a sort of endpoint (they conclude that they know each other and are married to each other), the maid emerges to address the audience and reveal, also at pointless length, that the impossibly obvious conclusion they have reached is secretly not so after all (because one of their outrageously obvious realizations was actually mistaken, for an absurd reason). When the maid is finally finished with this announcement she does a false exit only to return and conspiratorially add the tag: “My real name is Sherlock Holmes.” The profound inanity of this punchline, carefully placed at the end of a long descent through what already seemed entirely inane, is, I think, at the core of what the play does. To me it says: the infantile is the real, and to get the benefit of it we are going to have to strip down through your embarrassment, by stages. A “groaner” like “My real name is Sherlock Holmes” must be earned and then endured so that it can be surpassed on the road to purity. Sign me up!

And the play does end, as it must, in a pure state of inanity, a chaos of everyone on stage shouting language gobbledygook that has been calculated not just to be senseless and stupid but to be embarrassingly so, which is to say bracing and cleansing for those who need a cleanse, and delightful for those who are just waiting for the adults to finally let down the facade, if only for a moment. Here the facade is down:

So that all seemed clear to me, and I know exactly how to direct it/perform it in my imagination. It is not, however, how Ionesco seems to be played or understood generally, and this pains me. So I’ll let L handle the rest:

Harumph harumph. Broomlet Book Club undersecretary “Maddie” was moved to go searching for insight into the peculiarly niggling footnotes about discrepancies in the first production that pepper the text (e.g. after the direction for Mr. Smith to sniff for a smell of burn: “*In Nicolas Bataille’s production Mr. and Mrs. Martin sniffed too.”) and came across this article about its director Monsieur Bataille, which she forwarded to me. It gets at the heart of the interpretative matter:

“When we first read the play, we played it as a comedy,” the director recalls. “But our great discovery was that it lost all of its vitality when played for laughs. So we went against the comedy, playing it as tragically as possible.”

…”Ionesco,” Verdier says as Bataille pauses, “is very sensitive, you see, about Nicolas being his discoverer, even though he really is. Nicolas found the key to the subtext under the absurd surface of the text, and this had a profound influence on Beckett, (Harold) Pinter and (Edward) Albee.”

The 80-year-old playwright and the 66-year-old director have carried on a friendly, but sparring relationship, as if wary of being too linked to each other…

That is to say: the director and his cast found they weren’t up to selling the comedy as written, so instead they sold the gimmick of willful mal-performance. And then lo and behold willful mal-performance turns out to be so strange and disorienting a thing that the audience’s anxieties of incomprehension kick in and soon enough there is a smell of eager pretension on the air.* The audience is unable to maintain the impression that they are seeing what they are actually seeing — that being: a wholly perverse non-delivery of a play — and so they begin to suspect mysterious depths, that there may be something rare and fine and difficult at hand, something with subtext, something high. Not the genuine absurd — how childish that would be! — but rather Absurdism, a thing one can smoke and be French to with ease. Absurdism goes on to be installed as a whole emperor’s new aesthetic in theater departments everywhere. And Ionesco, seeing his cavalcade of bracing silliness converted into a beret-wearing cipher that does just the opposite of what it was meant to do — i.e. coddles pretentious avant-gardism rather than detonating it in googly-eyed embarrassment — registers his horror in what seems to me an admirably resigned way: by inserting disdainful footnotes in the play’s own mode of pointlessness. (*In Nicolas Bataille’s production, the audience sniffed too.)

Of course Ionesco was an undiscovered young nobody when he wrote this, and its success made him Ionesco, even if that success was on terms he never intended. So did he later sell out and cater to the berets? Or perhaps make peace with them? That I don’t know. I haven’t read his other works. (Well, I read Rhinoceros in high school but that was a long time ago.)

Yes, the above is just speculation. But at its heart is an observation I will stand by:

The magic of theater is mostly ritual and situational and applies to anything done under theatrical circumstances. It is not particularly dependent on intention or even execution. This is why terrible performances tend to be either excruciating or campily wonderful, but rarely indifferent: because the magic works, and its power, for good or for evil, cannot be denied. This affords tremendous leeway to theater artists, as even their most indulgent and senseless experimentation will seem vaguely potent under the lights. “I don’t know what this is but it’s interesting!” is the motivating principle behind a great deal of theater art. Part of that interest, part of what attracts an artist to a choice, is the impression of secret meaning. But since the audience isn’t privy to the process, they will have the sense that the artist actually has that secret meaning in hand and is teasing them with it. In fact what the artist has actually done and understood is frequently shallow beyond the audience’s will to imagine. (Especially at these prices!)

It is very difficult to sustain an awareness that something seemingly rich, deep, and challenging is actually just a smoke bomb chucked in the magic machine by someone else’s anxieties, or someone else’s impish whim. (Much easier to struggle struggle struggle to understand and then smile a Mona Lisa smile, chuckle knowingly, and light another cigarette.) But one should cultivate a capacity for this awareness, because it relieves one’s own anxieties. And cigarettes are bad for your health.

I guess this applies to all art.

R: Silly gobblegobblers, Trix are for kids! R out! (throws down mic)