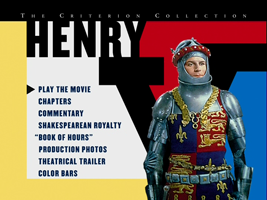 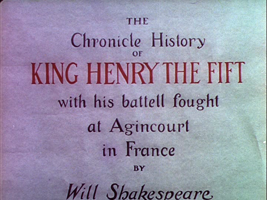 [The only onscreen title is as seen above, but posters for the original release of the film did call it Henry V. In a spirit of eager pedantry I originally gave this entry the long title, but then I thought better of it. I figure that if even the original posters were against using it, it would be too perverse of me. IMDB has no such scruples.

The above is the official writing credit, but the adaptation is generally attributed to Dent and Olivier together, and to these two IMDB and Wikipedia add Dallas Bower, credited in the film as Associate Producer. I think the commentary track may have offered some clarification on this point, but I forget. I’m not that eager a pedant.]

Technicolor is reassuring, and this comes from the era when it was at its most Technicolorish, the palette of The Wizard of Oz and The Adventures of Robin Hood: intense but matte, never electric. The contrasts are brash and loud but in that same forthright way as a WPA poster. In the 40s, noisy juxtapositions of color could still be essentially modest. Color hadn’t yet begun to leer and preen.

Laurence Olivier manfully declaims the “we lucky few, we band of brothers” speech, culminating in a roar of courage from the armored troops… and then seconds later, cut to a closeup wherein one can’t help but notice that he is wearing not just ruby red lipstick but also, distinctly, cobalt blue eyeshadow. And yet the whole 40s colorscape is so sexless and unworldly that the absurdity registers only as yet one more moment of dreamlike color-experience. The entire spectrum has somehow been rendered too assured, too masculine to deliver any sort of crisis of masculinity. Perhaps this is part of why The Wizard of Oz is so beloved by gays. The colors palpably relieve the viewer of gender anxiety.

I am grateful for the way the surface of such movies can relieve me of all sorts of anxiety. My point about the Wizard of Oz could also be put this way: it manages to contain things that appeal to gays while unmistakably not being “for gays.” One always wants to enjoy things without being implicated by them, without having to answer for one’s enjoyment in self-awareness. I always prefer things that do not call me out, or pose and say cheese. The movies of that era, their palettes and everything else about them, treat me with a touching dignity. An entertainment for you, sir. Here is some green, sir, and some red, for your pleasure. Thank you kindly, I say.

I let this movie wash over me, or let myself wash over it, without any great effort to comprehend, because that old-fashioned cultural hospitality is worth a lot to me, whereas the content here is decidedly not. Who gives a crap about Henry V? I’ve always disliked biopics and topic-pics (i.e. whatever genre The Social Network is), and I feel the same way about “history plays.” Namely: who do you think you’re kidding? These sorts of “dramatizations” of the non-dramatic seem to me exactly like the “dancing about architecture” we’re always being warned off. Acting about history?

Sure, it’s a basic human impulse to try to parse our reality into stories; that’s what storytelling is for. I get that. But the transmutation from objective fact into aesthetic form is essentially a magic act, and if you’re not careful, the essential lie of it will be exposed. It’s exactly because magic is a trick that it needs to be intuitive. A magician will turn a dove into a bouquet but never into a car; a certain conservation of matter has to hold. Biopics and history plays feel to me like an obvious violation of the conservation of dramatic matter. There is no earthly way that that can be a this. So obvious a violation, in fact, that I sense that audience and artist alike can only have accepted it through some kind of bad faith, a self-deception. (e.g. Being determinedly delighted by a magician who transforms a woman into a single chocolate sprinkle because the tickets were so expensive, or because the woman was hot.)

In his well-assembled but flatly delivered commentary track, Bruce Eder says — I paraphrase — that history plays came into fashion in the 1590s because the advent of political stability for the first time in centuries brought with it a newfound pride in “national heritage.” The plays cashed in on the national mood. I appreciated the tip-off; to me this is a convincing psychological background for the dramatic bad faith at work in Shakespeare’s plays about kings. The audience – Queen Elizabeth chief among them – was feeding itself an “edutainment” bill of goods as a ritual of political self-satisfaction. Shakespeare lovers have miles to say about the noble genius of the parts, but as for the whole… really, who cares?

Here’s who: people with their own political bad faith. “Hey, let’s film that famous play Henry V for the war-effort, because it’s about war and has those two famous pep-talk speeches. It’ll be tasteful propaganda because it’s about ye olde medieval times and thus relevant only by analogy, just like the Russians did with Alexander Nevsky.” “But wait, what was this play Henry V actually about and what is it actually like to sit through? Isn’t it about a battle fought for cynical and non-noble reasons, and isn’t it furthermore kind of a formless hodgepodge of stuff calculated to be topical in 1599?” “Surely no, because it’s Shakespeare. We’ll edit it if we have to, make it work out somehow. The main thing is definitely to say these words here because they are by Shakespeare, i.e. prestigious. One way or another, we’ll figure out how to get the audience to swallow it.”

So the end result, though it is full of creative intelligence, is another sort of bill of goods, a war-effort spin on the standard “middlebrow” package, which was in its heyday in 1944. The greatness of Shakespeare can be yours! See! The fabled Globe Theatre as it appeared in the oh-so-historical past. Hear! The words of the immortal bard pronounced with loftiest dignity. Gasp! At the grandeur and terror of a hundred-horse medieval battle (that we copied shot for shot from Eisenstein). Struggle! To understand exactly what is being said or going on, but Keep! It to yourself. Rise! To the occasion. Bear! a long and arbitrary succession of events. England expects that every man will do his duty!

Laurence Olivier has, like his modern-day equivalent Daniel Day-Lewis, the virtue of seeming to be at peace. I am more willing to watch him do essentially phony things if he seems relaxed. His legendarily great acting skill seemed to me just a very composed species of broad indication, but I need to see him in more. Robert Newton as the “rogue” Pistol is certainly a charismatic clown but not actually funny. My favorite performances were the French bad guys, who I thought did a better job than most of embodying the text rather than just delivering it with class. The movie as a whole mostly just delivers with class. But there are moments that work. I’ll grant Mr. William Shakespeare and Mr. Olivier the scene where Henry roams the camp in disguise. The famous pep talks are pretty good too.

The art direction is rich and excellent, variously suggesting theater, Hollywood, storybook, medieval illumination, and ever so occasionally, historical reality. The photography is generally attractive. The color I have mentioned. This is a very fine movie to pay no great attention to. I had a perfectly good time letting my thoughts play over the surface and then flit where they would.

The score is by William Walton and had no small part in making his reputation. It is that rarity of rarities, a movie score with a subsequent concert-hall life, where it exists as a short suite (I think in two different versions) and a longer “scenario” with narrator. There are quite a few rerecordings, including one with Olivier speaking. Walton offers up just what you’d expect – a lot of fanfares and other pomp, some authentic period music and some manufactured, the requisite orchestral battles and whatnot – but, as with Olivier, his British composure itself is satisfying. Real “high” composerly care has been taken and it feels luxurious.

The onscreen orchestra’s overture to the play is pretty catchy and I was going to make that the selection, just as Criterion made it their menu music, but it’s only Walton in quotes. So here’s the end credit, which in the suite is called “Agincourt Song” because it is a setting of the authentic 15th-century Agincourt Carol about the events of the play. Pretty lucky for Walton this song existed! Here’s the selection, our imaginary Track 41. This gives a good sense of the movie: a thoroughgoing class act, to be sure… but also, who needs it?

Once more unto the breach!