Written and directed by John Lurie 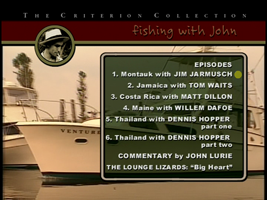 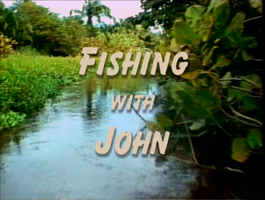 Criterion #42. Our first non-feature: a TV show, the complete run of 6 episodes.

I remember when it was still possible to come across weird stuff on TV. Now that we have hundreds of channels you’d think it would be a heyday for coming across weird stuff, but it’s not: more TV has turned out to mean more formulaic TV. Very few of those hundreds of channels are run with the spirit of the nonchalance that seemed to hold for decades, throwing on weird stuff in the middle of the night because why not, who really cares. Nowadays they care, and dare little.

It feels like the whole ethos of trawling for weird stuff is gone. The internet took it over and normalized it. Google is the behemoth of our time because all day every day is a trawl now. Even the most intimate “hey check this out” has been co-opted by calculating business interests. “You won’t believe this one weird artist’s unbelievable work that will drop your jaw” is a scam, delivered several times a day courtesy of the lamest people in your life. We harden to protect ourselves against the grift and bit by bit it becomes impossible for our jaws to truly drop. The old feeling of being a lone explorer happening across some undiscovered island has been usurped by the hateful metaphor of the virus: It’s viral! It’s a viral hit! Get infected! That really hurts, Charlie. And it’s still hurting!

Reading this little reminiscence (which may or may not be by someone I know) earlier this year put me in mind of that old pleasure of coming across the incomprehensible on TV, and how essentially 80s it now seems. This is another thing from the early 80s that someone once described to me as having had a similar effect on him. Late-night TV used to be its own world with its own laws.

For myself, in a slightly different vein, I think of the grinning bewilderment of the day I came across this without warning. How is it that this is being shown on TV, and yet it still feels like I will never have it common with anyone but a very few? Or, in yet another key, the day a few years later that I flipped channels to find this and sat in expectant confusion, which is to say transported, for the whole thing. How must the world really work, seeing as this exists? Time to rethink.

The sadder loss in the present day is the other side of the equation: nobody seems to want to make weird stuff anymore, either. People certainly want to make “this one weird thing that will drop your jaw,” or “this kind of amazing album by this kind of amazing band” but nobody wants to be a real freak in the night because almost nobody believes in unilluminated night or unlisted stations anymore. The hip of being weird so as to resemble late-nite mystery was overtaken by the mere hipsterism of being encyclopedic. All weirdness is just part of a typology. How horrible.

I guess the word I’m looking for is “underground.” When the mass culture goes underground (into the bomb shelter), where does the underground go? They walk among us, maybe. I guess that’s what Fight Club was about (17 years ago!). Who’s keeping it real today? Where’s my counter-culture?

The answer probably is: if you want to find it you have to dig, and be honest, you don’t really dig, do you. No, I don’t. I just expect that flipping channels will eventually turn stuff up. I probably just need to be more adventurous in my explorations if I want a sense of adventure. Okay fine, good advice, thanks.

Well, anyway, these thoughts were provoked by watching “Fishing With John.” This is one of those things that you might well flip to and be surprised existed. Utterly relaxed, pointless, TV jazz. John Lurie, first-class New York hipster (in the original sense), makes a hipster fishing show where his cool celebrity guests get to be cool, in the sense that nobody tries to do anything in particular, such as be clever or catch fish or really anything. It’s a show about it-is-what-it-is. It’s just TV mystery vacation. Is there anything cooler than utter lack of anxiety? Not in those days. Maybe now, but not then.

The presence of an authoritative-sounding PBS-style narrator is silly in itself, and then he is made to say silly things (“How deep is the ocean? Nobody really knows for sure.”), and so the whole fabric of TV-showism is brought in on the joke. The point: TV is weird, fishing is weird, celebrity is weird, this show is weird, life is weird. And weird is, obviously, good.

Lurie’s commentary is as thoroughly low key as what’s onscreen, so he never comes out and says that he had any particular intention per se, but he does say several times how much he enjoys watching fishing shows and also making home movies of his own fishing vacations. And I think that’s really about it. The show is just some more time spent in that same goofy vacation zone of the mind. I can go there by watching a fishing show or actually going fishing, or in this case, by watching a weird pseudo fishing show made, while actually fishing, by a guy who likes fishing shows. This was very much John Lurie’s vacation but we’re welcome to watch and have our own.

This is an artifact of a less anxious time that really wasn’t so long ago. Let’s try to reach toward such things in a genuine spirit. Being cool can be ours again if we just clap our hands and believe.

[Speaking of which, I saw a production of Peter Pan a couple weekends ago at the Yale School of Drama where at the end the bombs of World War I fell and Peter Pan was gassed to death, with gas-masked Wendy the only survivor. What’s sad is that the audience basically gets what’s being gotten at by a stunt like this. A child knows better – that’s some blatantly absurd adult self-pity. Adults need to get over themselves. They did when I was a kid and they still do.]

I feel in fact aware of how uncool and unrelaxed a way of talking about this show this whole entry is, and possibly this whole blog has always been. (With the exception of a few cool entries.) Another thing this show reminded me of was the “creative arts” summer camp I went to as a pre-teen, which was somewhere at the intersection between fingerpainting and hip, and was very in keeping with John Lurie’s attitude here. I think the animation teacher may even have tracked some of The Lounge Lizards over the reels of freeform kid-produced chaos.

Here are a bunch of other dimensions of this show I could talk about but won’t: manhood; celebrity and selfhood; commonalities in re: cool/manhood of the various guests (Jim Jarmusch, Tom Waits, Matt Dillon, Willem Dafoe, Dennis Hopper); relation of silliness to spiritual experience (via trance, music, etc. as implicitly linked in the show); relation of home movies to creative moviemaking; career trajectory of John Lurie and current status, including my previous encounters with his music; skepticism vs. celebration of other people’s self-indulgence/self-amusement; fear vs. anxiety as illustrated on the show/psychoanalysis of John Lurie. Other stuff. But what’s better to say is that the show made me want to take it easy. It celebrated taking it easy and I was glad. And writing about any of this stuff, at least right now, would not be taking it very easy.

The music is all by Lurie and is an integral part of the creative fabric of the show. It carries a lot of its “meaning,” insofar as it has a meaning. The meaning is, I’m gonna write some music now. On the commentary at one point he says that writing soundtracks is easy because basically anything works with anything. I enjoyed hearing this voiced, since I’ve thought it myself but have always been cowed by the fact that I know others don’t think it. John Lurie it seems is not cowed by such things, ever.

There are many interesting little cues I could choose, but the show’s theme song is undeniably the correct choice. This despite its being a song, which I have carefully avoided thus far. I figure that since this disc’s being a TV show makes it an exception within the Criterion Collection, it can also be an exception to my rule. Track 42. As is often the case with these, our musical selection about sums up the flavor of the whole thing. It’s silly, but it knows that there’s more to silliness than just being silly. In there somewhere is the nature of art.

I recently read Pauline Kael’s long 1969 essay on “Trash, Art, and the Movies” in which she is at pains to praise “trash” while denying that it is “art.” Why is “art” so sacred that we need to reserve the word “art” for it? I would rather apply the word cheerfully to all, you know, art.

Thanks, Criterion, this was a treat.

What I’ve written here is all over the map but if the map is small enough who cares.