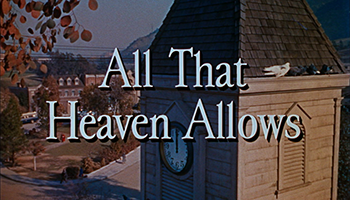 screenplay by Peg Fenwick
based on the story by Edna L. Lee and Harry Lee
directed by Douglas Sirk

This and Black Narcissus have both forced me to confront my instinctive assumption that a film photographed with painterly distinction must therefore be a film of depth. Clearly not so!

Or then again maybe it is. It depends on where “depth” lies. In visual art, the literary idea of “depth” isn’t generally what’s at issue. A Renaissance painting is rarely valued for its subject (fruits on a table? The Martyrdom of Saint whoever?); the “depth” is within the domain of imagery itself. Film can be that sort of medium, where a simple or formulaic subject is just a framework for the exploration of sensory values. But it seems to me that All That Heaven Allows was not conceived that way; the dippy screenplay is dense-packed with dippy dialogue and dippy events: whatever deeper resonances it may have, the story does expect to be taken seriously at face value. All the visual richness seems to be an elaboration after the fact: it’s Douglas Sirk seizing an opportunity to explore his own aesthetic ideas on the studio’s dime. It’s a fundamentally insipid movie that’s been forcefed expressionism.

That makes it an interesting object, and it creates an interesting effect. I imagine that if I had come across this movie in full ignorance of its (and Sirk’s) reputation, I would have noted that it casts a very odd spell indeed. It’s simultaneously plush velvet and wet cardboard. It’s a bit like the magical, billowing, dreamy, inviting, obviously-fake, chintzy, disgusting, gooey chemical snow into which Rock Hudson gamely flumpfs.

Maybe such things are best recommended by word of mouth, film-lover to film-lover. “Have you seen Sirk’s color melodramas? They’re really quite something!” Unfortunately, we live in a time where scholars feel a compulsion to take up old films as causes and try to boost their reputations ever, ever upward, into The Canon Of Greatness And Significance — as though that’s the inevitable next step in a virtuous historical process of rehabilitation. It’s an addiction to the idea of giving things Their Due; in its overeagerness it amounts to a form of insensitivity. (Have you noticed the sort of thing the Library of America has been getting itself up to lately?)

Put another way: plain old everyday mediocrity is not something that Criterion is very good at knowing about or delivering. Their pomp and circumstance tends to obfuscate ordinariness rather than elevate it. What the heck is this thing we’re watching? How could it possibly be that this package, this luxe commercial fetish object, contains a half-baked lower-middlebrow romance novel? It starts to seem almost like a prank. The effect they want to achieve needs to be approached from the other side: “this particular half-baked romance novel… is actually rather suggestive and striking, isn’t it?”

The colors! The lights! Yes! The photography is glorious. The film is an exquisite piece of commercial graphic art, no denying. But Norman Rockwell’s work has more feeling and vision in it, seems to me.

I like to get lost in old book covers; think about the way they make me feel — good and bad books alike. I like to touch down, internally, on the time and place they represent, both in real history and in the parallel history of dreams, on which they are a window. If that’s all the Sirk game is, I’m glad to play. Sure, these rooms made me feel things. There’s a hushed, half-awake sensation somewhere in there that I might recognize. But my personal dream, the thing that it’s rewarding for me to explore, doesn’t have the slightest thing to do with the story or the themes of this movie. Deadening conformity vs. self-realization through romance? Pff. As if. I’m busy looking at the lamps, here!

And yet witness e.g. the commentary track. That’s the real Sirk game: let’s talk about the social repressions of the 50s. Let’s look for ways this film is secretly “subversive.” Ah well. We can do that if you want. If we must.

Yes, psychological subtleties of production, design, direction are legitimately there to be noted — “you see, now her costume is starting to match his environment” — but let’s not lose sight of the fact that intricate code is a symptom of repression, not an antidote to it. Critics tend to gravitate to the difficulties, the problem-solving, but problem-solving only arises as a result of problem-having, and is problem-having really such a thing to celebrate? Wouldn’t we benefit from celebrating the art that we aspire to resemble, rather than the art that strains to resemble us? Listening to the extensive appreciation for this stilted melodrama, I felt like I heard a kind of retro-condescension at work: “we like this because it has to marshal so much craft and effort just to hint at things that we all now find easy to take for granted. Look at the brilliant artist struggle against his sad sad era! Isn’t it noble!”

Music is by Frank Skinner, who does a fine job laying down the very thickest possible carpet. Or: making sure every event casts the longest, saddest possible shadow. The piano plays a bass note: oh no! alas! alack! He unabashedly makes Liszt’s Consolation No. 3 the figurehead on his ship, as you’ll hear in the main title below — very much in the manner that Brief Encounter draped itself in Rachmaninoff, and to similar effect. The “kitsch” quotient is obviously even higher here — but when have I ever begrudged kitsch its kitschiness? If art can make me cry about nothing, more power to it. I can’t say this movie or this music wrung any actual tears from me, but I wholeheartedly endorse the attempt. Have at me, boys! 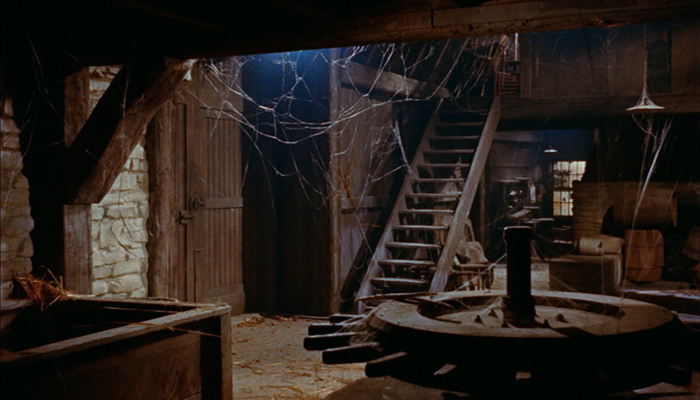