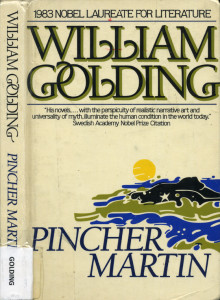 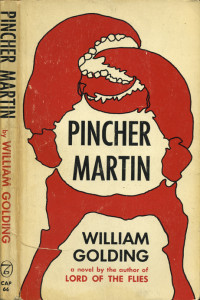 This is the only work Bloom lists for William Golding, which is a little like only listing one novel by Bram Stoker and having it be Miss Betty. It’s yet another indefensible pretension on Professor Bloom’s part, in assembling a list that’s ostensibly his best guess as to which 20th-century works will persist as canonical. His words: “What I have omitted seem to me fated to become period pieces.” (Peering down my nose smugly harrumph harrumph. To the power of twenty.)

However, Pincher Martin is better than Miss Betty.

I made a tentative start in the library copy at left, then happened across the copy at right in a bookstore and started again.

This is as brutal as they come. The word I have been using is “grueling.” This is a book that sets out to hurt, to sting, to be hard.

When I wrote about Lord of the Flies I said that people like it because it’s just Halloween. This is not. There’s no reading this to savor the ghoulishness; or at least there wasn’t for me. It is existential horror, meant very seriously and only to be taken seriously.

In fact it is intended so seriously that where my core beliefs differed with the book I found the book difficult to comprehend. Where once I would have contorted my mind to his theology just for the sake of the sentences, now I had the sense to preserve myself and accept a degree of vagueness. My quantities for “man” and “nature” and “consciousness” and “greed” are not the same as his, and I’ve decided I like mine. Everything I said about Golding in the Lord of the Flies entry applies here several times over. Ontology is psychology; this is the ontology of a kind of pain to which I am no longer committed.

(Artistic spoiler coming, but it won’t mean anything to you if you’re not in the process of reading the book.) In the climactic sentence, Golding identifies the consuming nothingness of death, the irresistible force of Nature, as “a compassion that was timeless and without mercy.” This is astute and moving, given the order of the world he is exploring, but to me it’s also an admission of the psychology within which the author works.

A “compassion without mercy” is pure oxymoron to a well-adjusted personality, whereas it makes deep and poignant sense to a self-repressive one. The grand struggle depicted in the book, which Golding seems genuinely to believe to be that of man against his own nature, of consciousness against its existential status, is actually just the struggle of one mental tendency against another. It’s a struggle whose resolution or lack thereof is

I recognize that the protagonist is not entirely an everyman, he is a particular furious, amoral, stubborn, demonically defiant individual, a Captain Ahab type. But Moby-Dick is clearly not of and by Ahab; it’s delivered in the voice of another mindset entirely. Pincher Martin allows room for anti-Martin interpretation but it certainly doesn’t spell it out. The impression given by the work as a whole is that this man’s struggle may be grotesque but that it is archetypal on a grand scale. Christopher Martin is not just a personality type; he’s the human condition. Or at least he’s a human condition.

That distinction is important. Which is it? How universal a statement is this meant to be? Golding’s intentions on this point are very hard to read. There are characters in Martin’s flashbacks who put forward positions of relative moral grace, but of course they aren’t existential centers. They aren’t the self, within this artistic universe.

All I can say is that the supreme brutality of the prose gives no indication that this artistic vision is being moderated or qualified. It is full force.

The ambition is about as high as one can aim and the artistic achievement is real. It is highly admirable stuff and I have no regrets about the time or emotions spent in reading it.

But I do differ with it.

Here’s an excerpt from early in the book.

Where we are: our protagonist’s ship has been torpedoed in the mid-Atlantic. He has been blown into the water, and has chanced to wash up on an isolated rock. He has hoisted himself to the top and now, utterly battered and exhausted, has found a crevice to lie in for shelter. All of this has been accomplished in what seems perhaps to be a state of compromised consciousness. This is the start of chapter 4:

The man was inside two crevices. There was first the rock, close and not warm but at least not cold with the coldness of sea or air. The rock was negative. It confined his body so that here and there the shudders were beaten; not soothed but forced inward. He felt pain throughout most of his body but distant pain that was sometimes to be mistaken for fire. There was dull fire in his feet and a sharper sort in either knee. He could see this fire in his mind’s eye because his body was a second and interior crevice which he inhabited. Under each knee, then, there was a little fire built with crossed sticks and busily flaring like the fire that is lighted under a dying camel. But the man was intelligent. He endured these fires although they gave not heat but pain. They had to be endured because to stand up or even move would mean nothing but an increase of pain — more sticks and more flame, extending under all the body. He himself was at the far end of this inner crevice of flesh. At this far end, away from the fires, there was a mass of him lying on a lifebelt that rolled backwards and forwards at every breath. Beyond the mass was the round, bone globe of the world and himself hanging inside. One half of this world burned and froze but with a steadier and bearable pain. Only towards the top half of his world there would sometimes come a jab that was like a vast needle prying after him. Then he would make seismic convulsions of whole continents on that side and the jabs would become frequent but less deep and the nature of that part of the globe would change. There would appear shapes of dark and grey in space and a patch of galactic whiteness that he knew vaguely was a hand connected to him. The other side of the globe was all dark and gave no offence. He floated in the middle of this globe like a waterlogged body. He knew as an axiom of existence that he must be content with the smallest of all small mercies as he floated there. All the extensions with which he was connected, their distant fires, their slow burnings, their racks and pincers were at least far enough away. If he could hit some particular mode of inactive being, some subtlety of interior balance, he might be allowed by the nature of the second crevice to float, still and painless in the centre of the globe.

Sometimes he came near this. He became small, and the globe larger until the burning extensions were interplanetary. But this universe was subject to convulsions that began in deep space and came like a wave. Then he was larger again, filling every corner of the tunnels, sweeping with shrieking nerves over the fires, expanding in the globe until he filled it and the needle jabbed through the corner of his right eye straight into the darkness of his head. Dimly he would see one white hand while the pain stabbed. Then slowly he would sink back into the center of the globe, shrink and float in the middle of a dark world. This became a rhythm that had obtained from all ages and would endure so.

This is not a special effect; most of the book is like this. The objective and the subjective, external and internal, are always intermingled.

I find it both thrilling and harrowing, to see substrata of conscious experience articulated on the page. Perhaps some of the electricity I feel in reading this stuff is specific to me personally, as someone who has struggled with horror in these same dissociative internal zones.

That kind of electricity is valuable; it means that the art is offering contact to rarely contacted parts of myself, live wires. For all that I came away with reservations about its particular vision, above all the book reminded me how unfortunate it is that most other artists just inherit their most basic existential premises, and never question them. It doesn’t need to be so.

Pincher Martin is about consciousness as an ordeal, but it’s still rewarding because it’s about consciousness at all. There are lots of other claims that could be made in the same conceptual space, and I’d probably prefer one of them. But I was deeply grateful simply to have been invited into that space. It is too rare a thing.