Trailers can be kind of funny sometimes.

This “Hamlet” is a good and rewarding play. Though it’s not always clear why things are happening.

It was during a high school English discussion on the subject of “Why is Hamlet acting this way?” that I realized that I took issue with the premises of English Class. It seemed to me that asking why fictional characters did what they did, and answering with speculation about their inner lives, was not really the study of literature at all — it was the make-believe study of make-believe psychology. And this was an odd thing to find happening at school, because the subject of human emotions was one in which we were not openly being educated, and about which I frankly doubted most of my teachers, my English teacher among them, to be very comfortable or perceptive.

In any case it was certainly absurd that the person chosen as the subject for an inquiry into the interior life would be Hamlet Prince of Denmark, who was no more than a series of speeches, a piece of a puppet show, a fiction, a being in the same existential category as Tweety Bird.

There is no ultimate assurance that Hamlet’s words and actions are psychologically coherent. They cohere only insofar as they are all in “Hamlet.” Arguing about him as a person seemed to me the same kind of geeky retrofitting as when people concoct technical justifications for stuff that happened yesterday, in willful disregard of the fact that the one and only correct answer is staring them in the face: it happened because the authors thought that it would make for a good show. There is no “why;” the only real question is whether the show worked for you. If it worked, the “why” has already been resolved; if it didn’t work, a “why” won’t help.

(In the years since high school, my attitude about these issues has complicated a fair bit, but I still feel the anti-psychological point of view as an important one.)

From this point of view, I dare say that “Hamlet” has been buoyed to the status of “the world’s most famous play” (per the lisping trailer above) by virtue of the fact that it does not completely work. It is built in a way that feels deeply intelligent but still confusing, thus seeming to invite endless vital argument:

After 400 years it’s time to really figure this stuff out, right? What really is Hamlet’s deal? Why is he being like this? For that matter, what’s Gertrude’s deal? What’s the ghost’s deal? Why is nobody around Hamlet capable of understanding him at least as well as the audience does? What does it all mean?

These are not questions about people, but about the workings of a play. The fact that this play has been produced tens of thousands of times and always with an eye to discovering and revealing “new insights” is a sure sign that the play itself does not fully function in any particular way and that there are no right answers to the confusion that it elicits.

William Shakespeare has definitely put some really marvelous stuff on the page — barring a few boring bits. But it’s marvelous principally as a kind of ritual, a garment that we are free to put on. “To be, or not to be, that is the question!” WOOOOOO YOU GO!

The difference between live theater and movies is that in live theater, the physical fact of a ritual being enacted is itself the reward. It’s right and good for such rituals to be full of mystery; we go to be a part of them, and we are mysteries to ourselves. But in a movie there is no such participation, and no ritual. As an audience member I cannot readily access any sense of occasion in the goings-on. The movie was made at various points in the past and now exists outside of time and outside of human tradition. There’s just a communique, which comes in a discrete block with no gaps: I, the movie, proclaim myself thus. So this Hamlet on film is does not embody any necessary ancient formal protocol, full of human mysteries. It’s just a movie, this movie. Its gaps read to me as gaps.

Why is he saying that? What’s that supposed to mean? Why are we still paying attention to this guy? Who really cares about Ophelia? Why is she even in this?

I think Olivier understood that this burden was upon him, and tried very hard to keep alive the sense of theatrical occasion by conveying a sense of ceremony, of supernatural order, through the visual. It’s shot in etched German-expressionist black-and-white, with heavy emphasis on several recurring architectural forms, spiral staircases and Romanesque arches (see below), meant to give a sense of the tragedy looming toward, and suspended within, abstraction. Fine. But at the center of the picture there’s still these pesky people and their dialogue.

The performances are boldly delineated, but never truly formalistic — these do still seem to be human beings, dealing in human affairs. And so when they don’t quite act like human beings, I naturally wondered: huh? That “huh” came honestly from the only place I know how to sit as an audience member.

Insofar as this is a good movie of a good play, it’s not an institution, it’s a distinct dramatic creation unto itself. Whenever the production seemed to make appeals to the audience’s admiration for the grand institution of “Hamlet,” I felt the point was being missed. In movies, any value and significance has to become apparent through the drama, and not vice versa. I like that about movies; I like that those are the terms. They’re just surprisingly unforgiving terms for the hallowed works of William Shakespeare.

That said, I was only in a position to think these things at all because the movie is in fact quite well done. It’s attractive, well acted, intelligent. It is not bland; it has verve, and pockets of real depth. I much preferred it to Henry V, which felt to me like a completely superfluous movie, despite all the technicolor razzmatazz. This is a good Hamlet. And maybe the upshot of all my musing above is that there is no such thing as a perfect Hamlet.

And hey, maybe it’s not an insurmountable obstacle. Why prejudge? Perhaps some director will come along some day and render this play into THE Hamlet as surely and irrevocably as Disney rendered Snow White into Snow White. Presuming that such a thing is impossible does nobody any favors, including Shakespeare. Shakespeare is doing just fine without our pre-emptive deference. Or oops, rather, he’s dead. He’s doing terribly. He’s dead no matter what we do. So go to town, boys. (Except you, Baz Luhrmann, you should sit this one out.)

This is our second Best Picture Academy Award winner from Criterion, out of only six in the whole Collection. That’s fine with me; nobody actually loves the Best Picture winners. Hamlet slots comfortably into that category.

Music is again by William Walton; the Philharmonia Orchestra conducted by Muir Mathieson. The main title doesn’t end properly — Laurence starts talking before it’s over — so our selection is the funeral march with which the movie ends. (Spoiler!) It’s basically the same material as the main title, and is all in the clear except for some walking sounds and five cannon blasts, which I think we can all handle.

Once again Walton turns out something of high taste and quality but a bit too staid. 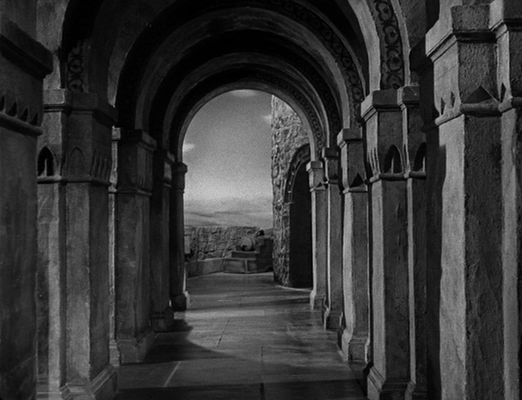