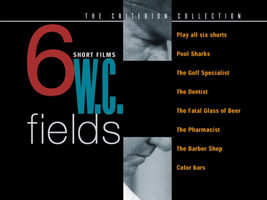 This is a DVD transfer of a Voyager laserdisc not initially published under the Criterion banner. The very last such, in fact; copyright 1995 but reportedly not released until 1998, after the Voyager Company proper had already been dissolved. I went and looked at the catalog of Voyager non-Criterion laserdiscs and there’s all sorts of odd stuff in there. (The Best of TED 2 (1990)?!)

The DVD, like its laserdisc predecessor, has no bonus features, and the essay is uninspired. 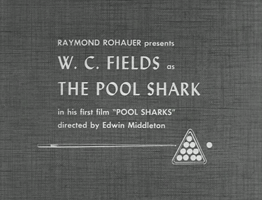 I watched it and immediately wrote:

Mean-spirited, asinine, and lazily put together. See young W.C. Fields as a normal-looking guy who wasn’t predestined to be a piggish alcoholic creep — he just made himself turn out that way. All the pointless knockabout finger-in-the-eye crap seen here is leading him in that direction.

He just seems like a jerk. You want to believe that jerks will get their comeuppance and I tend to feel he did, by turning into a cartoon snowman.

But comedy is a strange beast and, I suppose, so am I. There’s more than one way to plug in to a farce, more than one place to stand in relation to the laugh. I don’t mind laughing at the petty brutality of men as long as I believe that I’m laughing along with the clowns. So: am I? Was W.C. Fields a sad and angry man with an unreflective belief in showbiz, or a hopeful man who wanted to poke fun at sadness and anger? Are those necessarily different things?

The more comfortable I get with myself, the more I understand that all my responses to anything are fleeting and eccentric. And so are everyone else’s, so criticism as a discipline doesn’t really exist. When I looped back to the beginning to grab frames after having watched the whole disc, the soul of this first outing seemed to have moved in the right direction. Maybe all the knockabout is just like kids playing, and maybe that’s fine.

The Raymond Rohauer-ized sloppy organ music and tacky intertitles, added much later, don’t help it at all. The music sets the tone in silents, and this music sets a tone of distracted, uninterested insensitivity. Maybe W.C. deserved better. Or at least I did. 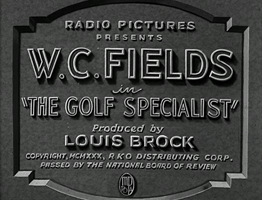 15 years later, still wearing a bad Charlie Chaplin moustache. The man liked golf, had a golf stage routine, and here it is, past its prime, being somewhat clumsily put to film after having been perfected (and exhausted) by decades of vaudeville use.

That’ll be a good description of all of the remaining films. This is like seeing some dinosaur band from the 70s that’s still touring, still singing their one big hit. One one hand, the routines have the benefit of years of familiarity and confidence; on the other hand, by the time he got around to filming this stuff, Fields’ relationship to the material has gotten so professional and removed that the clear eye of the camera is unflattering. Practiced vaudevillians — and one can still observe this at circuses and in magicians, party clowns, and all the street and amusement-park performers who do their act every hour on the hour — develop a kind of well-oiled superhuman efficiency that defies psychological viewing. They are not unicycling or juggling or clowning as a person, quite, but more as a kind of person-shaped ritualistic being with no interior. This has the virtue of seeming magical, but the price is that it is completely dependent on that magic. Pop the balloon and the show is suddenly very hollow, very sad. The cold scrutiny of film can be destructive in that regard. In close-up there’s not a lot of magic to be seen here, just a jowly man who used to do this stuff every hour on the hour.

The movie has a circus seediness that stands apart from the seediness of the persona and actually detracts from it. Or at least it did for me.

Of course, maybe that magic has to be brought and I just wasn’t bringing it. I know that when I was a kid I loved the anti-psychological ritualism of comedy, loved it as arbitrary rhythmic stuff to memorize that stood in absurdly for people. And surely W.C. Fields did too; that’s what all the peculiar non sequiturs and silly names are for. In this film, “J. Effingham Bellweather” is a wanted man, with a Woody Allen list of crimes: 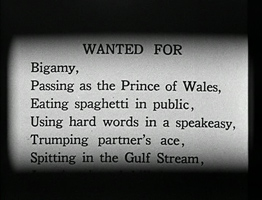 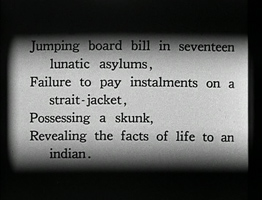 Exactly that kind of stuff would be funny to me if a) it were funnier, and b) I weren’t already on the defensive against all these damn carnies. 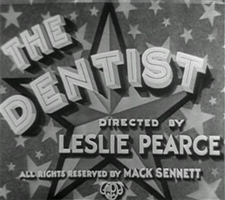 The remaining four films were produced right in a row by Mack Sennett — the very last things he did before his career ended in bankruptcy — and distributed by Paramount. These all star the iconic, cranky, moustacheless Fields.

The routine here is “An Episode at the Dentist’s,” as performed in “Earl Carroll’s Vanities,” a Ziegfeld knockoff show from 1928. (This is the skit for which Mr. William C. Fields was taken to court for cruelty to a canary. That’s the kind of thing that a commentary track could talk about, if there were one.)

As you might imagine, W.C. Fields is a rather insensitive dentist. Some golf has also been stuck in there.

This film can be summarized by the immortal line of dialogue: 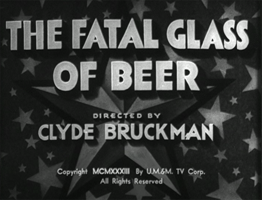 Suddenly this. Here’s where my response started to shift.

This was a centerpiece of the “W.C. Fields as counterculture icon” phenomenon in the 60s. At one level it’s a straightforward parody of sentimental melodramas and morality plays, but the target is so soft and the delivery so slow and deadpan that most of it feels like a pure surrealism.

The underlying soul in this case can be imagined, if you’re so inclined, to be knowing and weary and philosophical in its absurdism. Poor W.C. Fields, having to live on Earth among the tawdry things of man. So the 60s wanted to believe. But I think it’s actually just the same old performer-as-marionette act described above, caught on a different day.

It’s a pretty good day. I particularly liked the bit when Fields is filling his mouth to the brim with two different kinds of bread while his son emotes.

The routine was called “The Stolen Bonds” and comes from the same 1928 revue as the preceding, though one wonders if the basic material might well have been floating around a lot longer. The archetype of which this is a parody is surely from 1890 or earlier.

I’d never seen this before but somewhere I’m certain I’d seen the famous running gag reenacted. (“And it ain’t a fit night out for man or beast.” [: snow in the face]) Where was that? Does Woody Allen do it in Love and Death? Is it in Airplane? It certainly informed them both.

“Fine, fine,” I thought, “I guess W.C. Fields did some good in the world after all.” 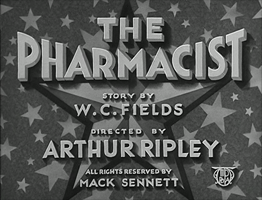 This was my favorite one. Based on a 1925 Ziegfeld routine.

I was tickled not just by the performance but the mere fact of the bit where the inevitable “thing that bothers him” is having to listen to his daughter on the phone with “Cuthbert.” (“No, Cuthbert! Really, Cuthbert? Well who told you that, Cuthbert? Oh, Cuthbert… oh, Cuthbert, that’s very very funny!”)

Most of all I laughed out loud at the sight gag about the free giveaway. I won’t spoil it.

I think this one worked best for me because even the character of the protagonist is up for grabs. Is he in the wrong? In the right? Surrounded by morons? A moron himself? Whatever works; it’s just nonsense time. “And now for something completely different.” I feel immeasurably more at home in that environment than I do in the lair of a jerk. 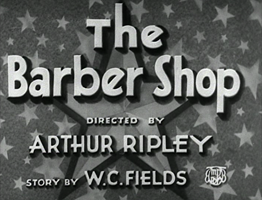 Retreads a lot of the same ground as The Pharmacist and The Dentist. (Not to mention The Bank Dick.) I like the zaniness spectrum that extends all the way from the sweet hominess of him delighting in his son’s terrible cat jokes to the Daliesque surrealism of the reproducing doublebass… but the centerpiece is torture with a dull razor and, as with the dentist’s drill, I don’t quite get the joke. Is it supposed to be the gratuitousness of the whole schtick? Maybe my nerves have been too dulled by the harsher stuff of later generations for me to giggle at the perversity of my torment, as I’m supposed to? I don’t know. I’m stretching.

The needless recurrences in comedy seem strangely telling, though I couldn’t say quite what they’re telling. Here is a partial catalogue of William Claude Dukenfield’s dream consciousness:

• A figure of benevolent authority is actually not competent or worthy of trust.
• A bank robber is miraculously foiled.
• A daughter is seeing a doofus against her father’s wishes. The father eventually gives up.
• Golf.

I’m not really going anywhere with this because I don’t feel it. As I’ve done before, I’ll just type up the list of topics I’m not pursuing and that’ll do the job for me.

• The “implicit sympathies” of a particular cultural moment, and the differences in implicit sympathies between then and now.
• The legacy of vaudeville / the extremely protracted death and transfiguration of vaudeville.
• The mimetic status of the “skit.” The mimetic status of the “short.” The mimetic status of a single joke.
• The trope lexicon of middlebrow humor; the in-itself significance of recruiting things from outside the standard lexicon (e.g. the existential “meaning” of a cockatoo or a doublebass appearing in this context; or see the absurdist list of crimes above).
• The condition of all humor as stemming from the subconscious of the purveyor, and thus the purity of Fields’s “noncommittal” approach. / But: the burden on the audience to share the subconscious of the comedian or else see the humor simply as a symptom.
•• The destructive effect to society as a whole created by the application of broader and broader communication technologies to non-overlapping psychologies. In god’s eyes there are no jokes, nothing to snicker at; from the god’s-eye-view of the global internet era we have boxed ourselves out of our own senses of humor, which is nothing less than our own smallness.

Main title from The Fatal Glass of Beer, composer/musicians unknown. (Head of the music department at Mack Sennett’s production company was apparently one Bernie Grossman but I don’t think that means he necessarily did much of the composing.)

There are cute “comedy” band cues at the start and finish of all the sound films, but I like to pick original music whenever possible and I doubt any of that music was original — it sounds like roughly spliced library music, probably from earlier Sennett productions, or perhaps even bought from other studios. Who knows. Whereas the present bit of parody “old-time” music has clearly been made special to order for the throwback parody melodrama of The Fatal Glass of Beer. The sound of the Mack Sennett logo dog barking at the top there confirms that this music isn’t the result of later meddling by the distributors (as reportedly some of it is).

Sounds like this was done as cheaply as possible: two musicians making it up on the spot. 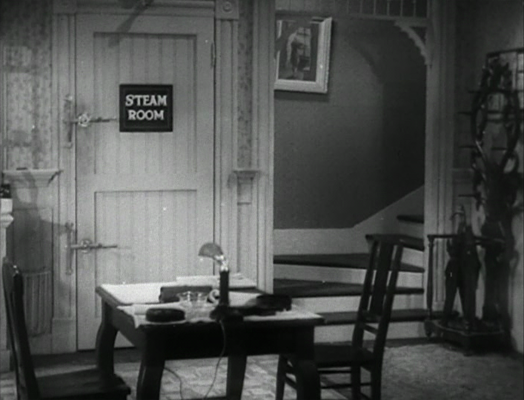