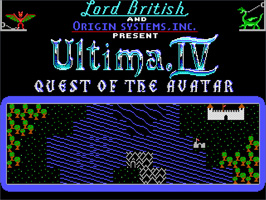 [Played for a little more than an hour, 5/5/15, then read about the game and watched videos on and off for a month…]

Sixth of the seven GOG freebies when I signed up on April 8, 2012. Was added to the GOG catalogue September 1, 2011, along with the rest of the Ultima series. This particular game was offered for free no doubt because of a long history of having been treated like freeware, even though it’s technically not. This traces back to the fact that the full game was distributed “for free” on a CD included with the August 1997 issue of PC Games magazine. Seems like the owners thought of it as a one-time promotion and only afterward realized that because of the damn internet, the game would go on being passed around for free, forever. Oops. That’s 1997 for ya.

Yeah I didn’t play it. This is the oldest and most influential and most “important” game on my list, but I just can’t right now. I can’t.

I’ve never played an RPG to completion, or really at all, and I like the idea of changing that. I’m excited to dig in and really get the measure of one of these things, see what it feels like to go all the way up into the nerdosphere and try to keep breathing deep slow breaths. I also liked the idea of playing this very famous and beloved one. I wanted to go back to 1985 and imagine getting lost in that bare grid and its moveable type world of simple square icons.

But most of all the fact that the game takes place on a giant map of mostly empty wilderness, to which one must constantly refer. This is really what turns me off so hard, and what might be a stumbling block in a lot of RPGs: the whole appeal of computer games, to me, is that they open a door to imaginary space that I as a player enter and experience. Yes, I might well choose to create a map of that space to ease my way — as in a text adventure — but the map does not determine the nature of the space; very much the other way around. In fact often those Infocom maps couldn’t really be drawn literally because they made no topological sense. They were really just sort of mnemonic devices. Whereas here in Ultima, the territory you explore is too vast to be felt out from the individual’s perspective; it just exists to space things out and give an epic extension to the proceedings. Sure, part of the game is discovering towns and stuff that aren’t shown on the official map provided in the box, but that’s not the same as discovering the space itself. You’re not expected to; you’re just expected to keep checking the map and figuring out where you’re headed.

When a map is onscreen, somehow it’s much much better. The screen is the portal; everything beyond that portal is of a piece. Are there maps in the magical space? Well, great, that’ll help me get around.

Actually, when this game first came out and was so beloved, probably players were getting the feel of the territory, genuinely exploring, by just walking around. The problem is just the scale. Did you see that the walkthrough video was 40 hours long? That’s why I couldn’t stomach taking it on. It’s something about scale; my brain can’t process this scale at the moment.

There are lots and lots of interesting things to discuss about this game. It’s all about morality, as conceived by the completely fascinating personage of Richard Garriott, genuinely trying to make the world a better place by schematizing the moral structure implicit to him in Dungeons & Dragons, The Wizard of Oz, and other Americana. And who’s to say this game didn’t make the world a better place? My parallel preoccupations with nerds and philosophy could have a field day here.

But I didn’t play it. Hey, if you wanna read analyses of Ultima IV or ponder the Citizen Kane life of millionaut Richard Allen “Lord British” Garriott de Cayeux, there’s plenty of stuff on the internet. All you have to do is Google. (You know how to Google, don’t you, Steve?)

Since all I played is the very beginning, I’m going to fulfill my blogbligations by reenacting it here. Don’t worry, this will be fun.

Instead of just opting be a bard or a shepherd or whatever, as one does at the beginning of many RPGs, in Ultima IV, a game about becoming a moral paragon by mastering all virtue, we begin with a test of our natural moral inclinations. The idea of which is great! The execution is a bit eccentric. I think what follows should serve as a fine sampler of the Richard Garriott mindset.

Here are the questions I received, in order. I typed up my thought processes in the moment and copy them here unaltered. 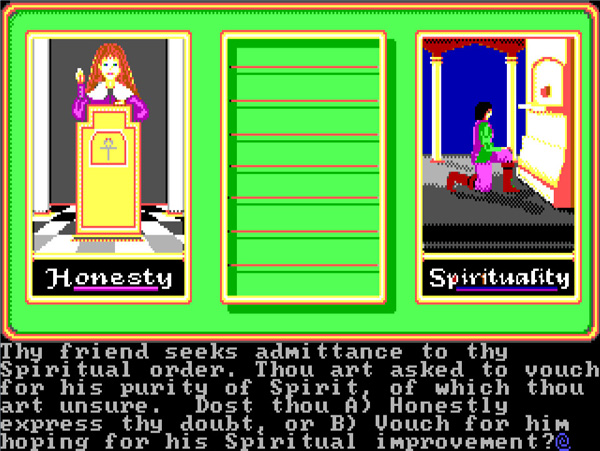 The problem for me here is in the passive phrase “Thou art asked to vouch…” Asked by whom? What kind of authority structure does my Spiritual Order have, and how integral is it to the spiritual substance of the order? Is it possible to distinguish between adherence to the authority of the Order and adherence to the spiritual creed? The question is basically whether I am willing to “bend the rules” because I believe in the possibility of spiritual growth. But how could I ever be a genuine adherent of the order if I differed with it on such a basic issue of the nature of spirit?

After much deliberation I answered A), reasoning that if I genuinely consider this MY Spiritual order, which seems to be given, then I would consider its criteria for induction spiritually sound. If for some reason (not elucidated here) those criteria include “purity of Spirit,” then yes, I would give completely honest answers about people I knew. I wouldn’t want to be part of an order that I felt had bad rules. 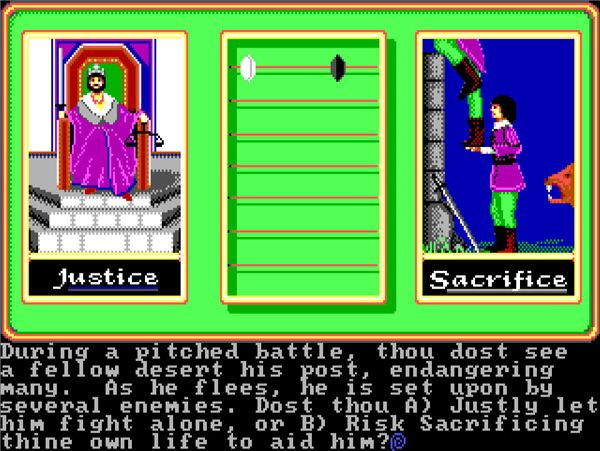 I certainly would not let the man fight alone simply as a way of meting out Justice. However I might use the concept of justice as rationalization for the fearful course of action I would be independently inclined to take. The question of whether I risked my life to aid him would be entirely dependent on my assessment of the risk and not at all on the concept of whether he deserved it. So the question here is whether I answer with reference to the announced virtues (in which case I would choose Sacrifice as more important than Justice) or with reference to the scenario (in which I tend to imagine myself making the more cowardly choice.) Given that the phrasings of the two options are explicit about naming the virtues, I chose B). 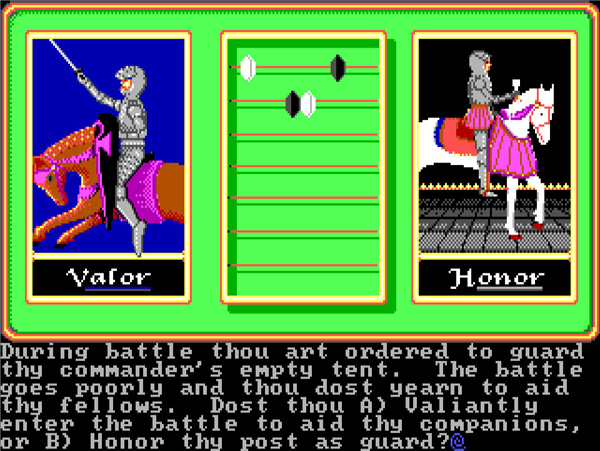 This is a tough one for me. The decision would be entirely dependent on other factors. Why am I guarding the tent? Are there things in there, or is it just a matter of form? What kind of counterpressure does this army put on me to prevent me from making my own decisions; i.e., what kind of punishment might I receive for disobeying orders? The question of “honor” is really in the eyes of others, not me. If my commander is obsessed with such things, then potentially my staying my post no matter what does him an emotional service. On the other hand, if the people around me are not interested in honor, then neither am I. So I guess the answer is that I as an individual am more interested in Valor; given how little information I have, that has to be my answer. But the question implies a commander and an army to which I am obligated. My relationship with these abstractions is certainly anxious, and I would be very likely to fixate on pleasing them! But I wouldn’t call that “Honor.” I don’t really believe in “Honor” as a pure virtue. A). 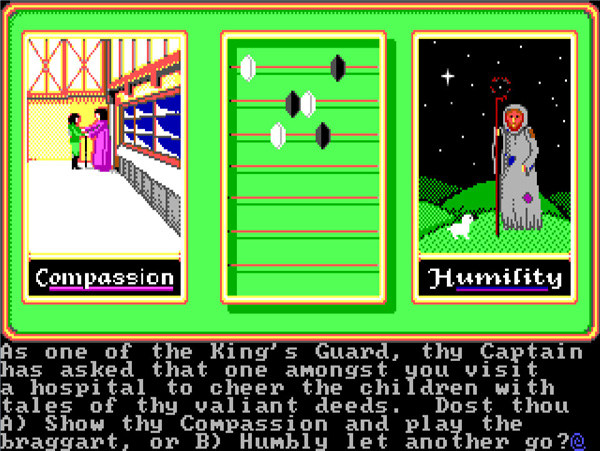 This scenario is particularly forced and silly. Cheering children by telling stories at the request of one’s captain doesn’t seem to me the least bit “unhumble.” If this is a legitimate way of thinking about “Humility,” then I don’t care for “Humility.” A). 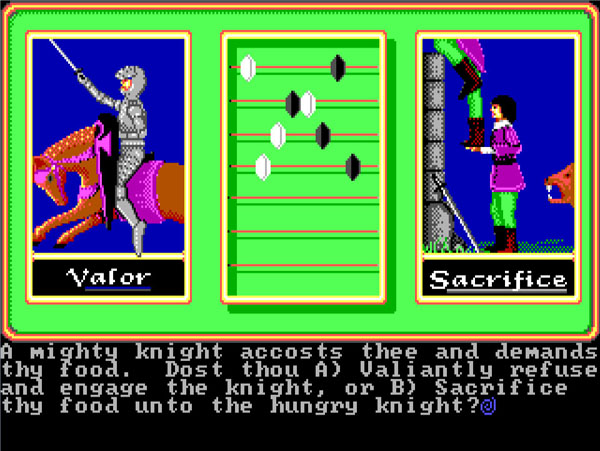 It depends on how much I need the food! Do I risk starving myself? Or am I at no risk and have plenty of food? Is “valor” just a matter of resenting that he “accosted” me? The question does say that he’s hungry, i.e. not just trying to throw his weight around for its own sake. So, all things being equal, how is “Valor” different from hypersensitivity? B). 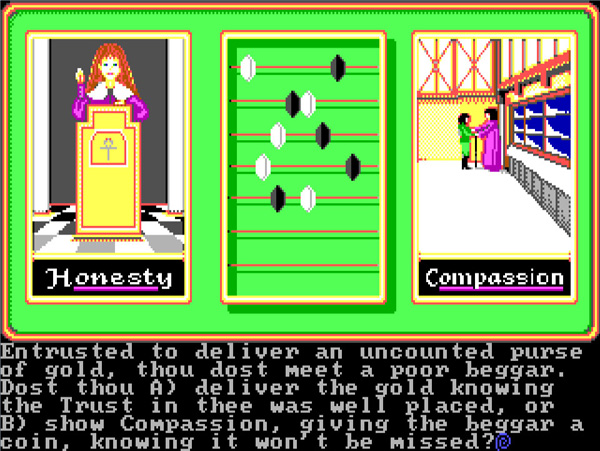 Again, from and to whom am I delivering this purse? The question is about being open to stealing, but there’s no suggestion of from whom I’d be stealing, which seems to me a necessary part of rationalizing stealing. The question strongly implies that I do not have any prior relationship to this beggar, that he/she is simply a stranger I encountered while doing an errand that is meaningful to me and to someone I know. Poverty is going to exist. I see no reason to steal simply because I happened to encounter a poor person on the road, which surely happens all the time. A).

Am I a “thee” or a “thou” or what? The question is interesting to me because it doesn’t make clear how my situation, believing I slew the dragon (because I’m told so), differs from my friend’s, believing he slew the dragon. If I take the question at its word, as fact, and consider it incontrovertible that I slew the dragon, I see no reason to sacrifice my achievement to my friend just because he’s lying or deluded or something. However if the idea is that my friend and I each think we slew the dragon with equally good reason, and this is one of those cases where “official historical fact” breaks down (i.e. actually neither of us “slew” it, a rock fell on it. “Well, I started the avalanche!” “Well, the dragon wouldn’t have been under it if it wasn’t for me!”) then I might very well be open to splitting the reward. I’m not greedy about things. But I would never just grant it entirely to someone else no needier than me when I think I earned it; there’s no reason given why I would do that. A). 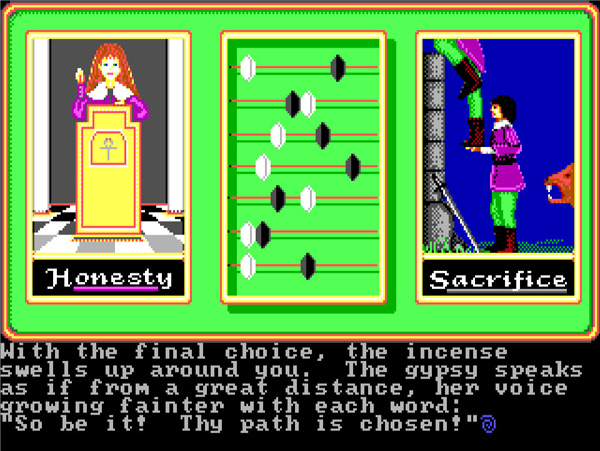 If you follow what’s going on in the virtue bracket, you’ll see that this process has attempted to winnow out my primary virtue: apparently it’s Honesty. This resulted in my being born as a mage.

So far I was pretty excited about this game! Then I wandered around the actual game itself for an hour and realized I’m not ready. I’m just not ready. Sorry, everybody!

Feel free to submit your own ethical takes on the questions above.