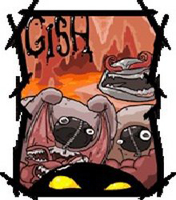 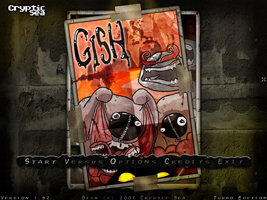 Fourth of the seven games in the “Humble Voxatron Debut,” purchased November 9, 2011.

I’ve said before that I don’t much care for “physics” as a feature attraction — it just exposes how limited and artificial our control schemes are. Gish doesn’t go the full QWOP, but it does basically consist of wrangling with the controls. Want to make the blob jump and stick to the wall? Great, but can you? Dammit. Dammit. Dammit.

Dexterity puzzles have always been a touchy business. They’re designed to be used a certain way, but they’re also designed to be frustratingly hard to use that way, which goes against the spirit of “design.” What constitutes a well-designed frustration and what constitutes frustratingly poor design? It’s in the eye of the beholder, naturally. But it does help that marble labyrinths and the like are physical, so our struggles with them are genuinely part of our lifelong struggles with physical existence. Video games can’t claim that.

I suppose all platform games are dexterity puzzles of a sort — want to get Mario across the gap? great, but can you? — but to the player there’s a big difference between a game where the challenge seems to be in the character’s environment and one where the challenge seems to be in the controls. I guess that’s really just a measure of how fluent the player is in the controls. Perhaps with enough time, QWOP would really feel trivial, since there are no actual impediments to be overcome. (Actually not true — if you get good enough in it, I’m led to understand that there are hurdles somewhere way down the track.)

But this is the process of learning anything: what is at first a challenge gradually becomes a method, for addressing oneself to the next challenge. Mastery creates transparency. A kid has considerable trouble staying upright on a bicycle, but cycling competitions are not about facility at staying upright. Cycling competitions are based on having completely forgotten that it was ever a discrete task at all.

I try to remind myself of this when I come up against something difficult while playing the piano: yes, it is difficult for me right now and I aspire for it to be easy in the future, but it’s important to envision that properly. The goal is not some kind of glorious triumph over the difficulty; the goal is for the thing itself to have ceased to be a discrete “thing,” such that I am once again only aware of music.

This is what “leveling up” in games is supposed to represent, and why it fails. Real leveling up, in life, feels like always being on the ground floor; difficulty rolls out of existence beneath you while your experience stays center. I aspire to play the piano with such effortless facility that I am unaware of that facility as even constituting a phenomenon, and the only object is the music itself.

What happens to a video game when one gets this good at it, so good that one can always simply do whatever one wants, effortlessly and without awareness of the possibility of “difficulty”? Does the game disappear? I say no, because there is content in video games, and it’s this content that interests me in the first place. But to many people it seems the answer is yes, which is why we have all these “achievements” and “speedruns” and high score competitions: things to do after you’re too fluent for the game to exist as such. The idea there is: without resistance there is no being. I disagree.

Let me respond directly to this video by the guy who (probably) put Gish in the Humble Bundles in the first place — this is the same guy who made a similar video extolling the control scheme of Hammerfight, if you remember that one.

He talks about “shallow controls” vs. “deep controls,” which probably wouldn’t irk me as terminology if I agreed that “deep” controls were inevitably superior, but I don’t. In his words: “Gish has deep controls, because they work at a level below what you explicitly intend to do.” The implication is that this makes them more rewarding, because when one engages with something at this subintentional/subconscious level, the experience becomes more full. The problem here, as I see it, is that the subrational mind is a very slow learner and requires much greater time investment to find its footing — an investment for which most games aren’t ready to take responsibility. They are after all just games. It’s akin to saying that Swahili is “deep” where a cryptogram is “shallow.” Absolutely it is, but that’s exactly why I wouldn’t learn Swahili for fun while I’m eating breakfast. It’s better as a language and much worse as a puzzle. Which is Gish?

More of his words: “In most games you have a ‘use’ button, and if you press it while near a switch, you flip it. However, in Gish, you have to physically move it from one position to another. This is more work, but it’s fun because there’s so many different ways to do it. You can stick to it and pull it, or become heavy and push it, or knock an object into it.” My words: Why is ‘different ways to do something’ fun? We have all those same options in relation to real switches — do you have fun flipping them? In fact, we have all those options in relation to real everything — do you have fun doing everything?

If so, great! I’d like to have fun doing everything.

His words: “The physics-based controls are almost impossible to master, so they’re great for multiplayer.”

My words: Yeah, that’s probably so; struggling to cope with the same arbitrary system can bring people closer together. That’s also exactly why they’re not great for single player vs. computer world, which is how I was playing.

So what is the content of Gish? It’s recognizably an Edmund McMillen game — the eager adolescent juxtaposition of cuteness and brutality — and also very clearly an earlier effort. Things feel a little diffuse and repetitive, and the design isn’t tight or polished. It feels like “Yeah dude, we made a game!” 2004 was, I think, right at the beginning of the rise of small independent game development as a mainstream cultural force, sort of like the late 80s were for movies (the Sex, Lies and Videotape era). This game has some remnants of the previous, less self-respecting era, when there were no “indie” games in a hip sense, just amateur games, underground games. This is sort of a grunge game.

Listen to the music: doesn’t it sound like the game is probably from 1993? Maybe it’s just that that’s the era when I was made aware of Mr. Bungle, whose sound this is.

Anyway, as far as meaning goes, I didn’t believe that I was really supposed to care about Gish the blob of tar and his human girlfriend — certainly I wasn’t supposed to care about them as much as I did about the gameplay. It all seemed deliberately like something that someone doodles and then explains in retrospect. Don’t get me wrong; I love that kind of creativity, and some of the best games have been just that! But it means the “story” and the “setting” were meant to be secondary. And as I said, the content is generally what interests me in the first place. Not a lot to see here: just physics and a goofy attitude. So, with no ill will at all, I think that means I’m done.

If I had spent more time with it, might I have gotten more fluent? Well, sure! Same with Swahili, but it hasn’t happened yet. There has to be a reason, you see?

Here’s a postmortem article; always sort of interesting even when I don’t care much about the game.

The basic credits are: