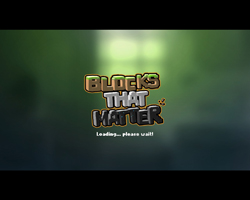 (i.e.: Completed all 40 story levels; got the “Blocks that matter” in 39 levels (the last one is an infuriating split-second-timing thing that I got sick of trying); got the gold star in 18 levels; unlocked 13 of the 20 “bonus levels,” completed 11; completed all 10 of the “chocolate” levels.)

I have now played my way entirely through the 9/30/11 purchase. Chronicle of my purchasing history continues:

On 10/31/11, I get an email announcing a new Humble Bundle: the “Humble Voxatron Debut,” initially containing only Voxatron. I don’t bite. Then the next day it’s updated: now it also features Blocks That Matter and The Binding of Isaac. Still don’t bite. Then a week later, 11/9/11, there’s a second update, adding four more games, one of which is Chocolate Castle, an obscure title that I had previously read about somewhere as a must-play game for puzzle aficionados and had considered buying, but had been turned off by the full price. So this was my chance. At 10:20 PM I bought the bundle of seven games for $5.50 (to beat an average price that had apparently gone above $5), which comes to $0.79 per game.

Three of the games (Voxatron, Chocolate Castle, and Zen Puzzle Garden) I played sufficiently at the time that I don’t need to return now. (I did in fact finish Chocolate Castle, which lived up to the recommendation.) The other four have remained untouched and it is now my project to touch them. Beginning with Blocks That Matter.

This game pleased me deeply and I don’t think the reason can be put into words, but here are some words.

It had that magic that I always want to find in games, where the music, the graphics, the sounds, and the interactivity all cohere into a single aesthetic murmance. While playing, I consistently fell into that state of mind where, in every element of experience, more seems implicit. Some unknown, ineffable more. What is behind this “room”? What is just beyond the edge of the screen? What texture would I see if I could look at these blocks up close, if I were really inside this space, contained by it? It’s not so much that I specifically ask myself these questions; it’s that my mind enters a state where such questions become fundamental. I am parsing the experience in feeling.

My current philosophy is that entering this rewarding, humming state of mind needn’t be a matter of waiting for the right “triggers”; it’s something I can learn to will (or at least learn to allow at times when I might previously have resisted). And I’m learning. But there’s nothing wrong with enjoying the benefits of triggering stimuli when one comes across them.

What are they in particular, here? I don’t know! I only know what I feel.

What I feel is that first and foremost the music taps into that place very assuredly. The whole soundtrack exudes a feeling of enclosed space, that special underground quality that video games can have. It’s in the easy steadiness of the compositions, but particularly in all those muted back-of-the-head sounds: I somehow feel the music in the nape of my neck. A few years ago I wrote a draft of a book-length essay on related topics, and maybe I’ll return to it someday, so I guess that’s enough on that for now.

Then somehow blending with that impression is the visual style. The lines are somehow too thick to be “cool,” too straight to be “cute,” too inaccurate to be “clean.” They make the space feel alive the way my own doodles feel alive to me, the doodler. It’s not that the images are particularly good; it’s that they’re themselves and not selling anything else, a quality they share exactly with an eraser on your desk, when your eye comes to rest on it and you fall into a dream.

Then little touches: the whole screen has been vignetted, with the periphery falling gently into shadow. The little robot bounces back off things just so. The pit-pit of his feet meshes with the dink-dink of the music. And then of course the Minecraft-style chop-chop-chop effect, where cubes of matter are simultaneously destroyed and acquired, is somehow profoundly satisfying (which may well be what has fueled Minecraft‘s ridiculous empire).

(Are you one of the non-game-playing people in my life reading this, and are you telling me you don’t know about Minecraft? This one is a significant phenomenon in the world today, so educate yourselves.)

Many game designers would love to have created the sort of subtle mental effect I’m talking about. So does that mean I think these guys were exceptionally good at it? No, not really; I think it just happened to work out that way. It’s very particular to me that this game had this effect on me, and I’m not sure they specifically had exactly the experience I’m describing in mind, just like they didn’t specifically have me in mind. In fact I think a lot of the alchemy I’m talking about is always going to be mostly luck. It exists a bit beyond the human ability to calculate.

What gave this game a special feeling is that none of these things I’m talking about felt very tight or impressive; it all felt genuinely casual, leaving some mental space undeclared. Room for that mysterious more.

The nostalgia issue. Like I’ve said, I’m wary of nostalgia-based game design and this game would certainly seem to be guilty. And yet here I am waxing about the wonderful trance of present awareness it created. How do I reconcile these two attitudes?

Well, first of all, I don’t. 1a) I contain multitudes and all that. 1b) I’m not sure those two things are in any real conflict.

Second of all, I can make a distinction between nostalgia and tradition. Some things are built out of stuff from the past because of an ideology of self-abnegation, but other things contain the past simply and honestly because they descend from it. This game falls right on the line.

The developers had this idea of “a Tetris platformer” — which is a conceptualized innovation rather than an intuited one, but still not necessarily nostalgic — and the first thing they did with it was to make a mini-game that was explicitly referential, a post-modern iteration on 30-year-old icons. This is exactly the kind of thing that bugs me: video game culture constantly feeling the impulse to demonstrate that it is a culture — with a heritage — by obsessively “celebrating” that heritage. Which conveniently happens to align with nostalgizing the lost youths of the developers. And with reflexive nerd cred-strutting. “Hey man, remember Super Mario Bros.? That shit is like the ABCs to me!” has become an institution, or an addiction. To me it tends to feel very small-spirited, secretly desperate.

So for these developers, Blocks That Matter is clearly a step in the right direction, toward taking authentic ownership of their own ideas. It takes the same “Tetris platformer” idea but tries to actually build it in its own right, rather than just offer it up as mere riffing on hallowed greats.

But then, as if to compensate for their hubris in having made their own game, they absolutely loaded the trunk with humility-nostalgia-“shoulders of giants, man!” adulation cred. The little protagonist robot, we are told by the game, has been created by two game developer characters named Alexey (after Pajitnov of Tetris) and Markus (after Persson of Minecraft), who have been drawn to somewhat resemble their namesakes. This genuinely embarrasses me, especially after seeing the YouTube comments on the initial trailer for the game, to the effect of “Cool, they worked on this game?” “No, you’re missing the point, to us they are untouchable golden gods so this is our ‘tribute’ to them.” “So, wait, they didn’t work on this game?”

And then above and beyond that, the bonus “Blocks That Matter” to be collected in each level turn out to be shout-outs to other block-based games, past and present. Portal, Super Mario Bros., Boulder Dash, Ilomilo, Minecraft, Lode Runner, etc. etc. etc., one for each of the 40 levels. It’s like a built-in bibliography, or a litany on the anxiety of influence.

On one hand, I like games with cubes as much as anyone and I appreciated being tipped off to some games I’d never heard of (e.g. Ilomilo). As collectibles go, this one is less inane than most.

On the other hand, the whole thing is small-minded. In any other medium, this “40 tips of the hat to all our amazing progenitors” thing would feel distinctly childish, wouldn’t it? Doesn’t it here? Can you imagine if a novel had each chapter named after a beloved novel that had come before and OMG influenced the writer? i.e. Chapter 1: Great Expectations. Chapter 2: Moby-Dick. Chapter 3: The Hunger Games. Chapter 4: The Great Gatsby. Chapter 5: 2666. Chapter 6: The BFG. I think everyone would feel that as incredibly immature humblebragging, or at least a completely parochial idea of cultured humility. For god’s sake, don’t show me all the gold star stickers on your library card, just write your book! You’re allowed!

My point is, we should hold video games to no less a standard. Yeah, even games by a couple of French kids. Come on, French kids, you’re allowed! Everyone’s eager to have a culture, but shoutouts are the opposite of a culture. Take the reins and just be what you are.

(I have always been exceedingly touchy about “these are a few of my favorite things”-ism. I know this is all overkill.)

The music presents a different twist on these same issues. It is full of “chiptune” sounds and ideas, meant to evoke the now-antiquated technology of a prior generation’s games (I’m the prior generation, here). But that’s exactly why it’s not nostalgic: the composer wasn’t born until 1986. By the time he was 8 years old, nothing was using these kinds of sounds by necessity anymore. His affection for them must be aesthetic rather than sentimental/ideological, and I think it shows, in his artistry.

That, or his nostalgia is for a time in his earliest childhood, early enough to resist over-conceptualization. Why else would he be such a weirdo?

In any case, it’s undeniable that there is a legitimate aesthetic world to explore in those old videogamey sounds. This particular exploration feels to me like it’s in good faith, looking forward to the new creation rather than backward to the cachet of the reference.

As an actual puzzle-platform game: it’s okay. It’s fine. The imposition that one must place four blocks at a time, tetromino-wise, is the core of the game, but it also never quite stops feeling high-concept, never quite jells into a necessary reality. I think this is so because the game arose from an initial “what if Tetris were a platformer? concept, rather than a dream.

Then again sometimes I do dream the Tetris pieces. They’re very charismatic.

The charm of the game’s aesthetic embrace passed over into my impression of the levels too; stuff like figuring out how to get up onto a certain ledge while still carrying 8 blocks (or whatever) ended up seeming worthwhile and rewarding. In retrospect, in the abstract, it usually wasn’t that meaningful a challenge — rarely that deep kind of art that puzzles can be at their best. But a game isn’t played “in retrospect” or “in the abstract.” Its charm was real, and making my way through its garden of levels one after another became part of that charm. It’s not a construction of any great rigor or insight, just a pleasant garden.

Anyway, I had a very good time with it, but that doesn’t mean I’m recommending it to anyone else. I just happened to have this private experience and I’m just reporting that it happened.

Four young French guys: two who met working at Ubisoft, plus two collaborators. Montpellier looks like it’s probably a nice place to live. Credits as they appear in the game: