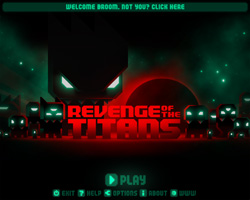 A nice sturdy sort of indie game: not too flimsy, not too vain.

Genre hybrid: “tower defense” plus “real-time strategy” (or “a tower defense game with RTS elements” or “an RTS game disguised as a tower defense game”). But this, the customary way of describing games, is just a needless commitment to categorization (a tendency characteristic of the gamer mind). All cultural development is recombination, reshuffling of what exists; anything new descends from what’s old. The question is what it has descended to be. The game is interested in being itself, and I am interested in playing it as itself.

Also I have no long history with either the “tower defense” or “RTS” genres, so I have no natural inclination to evaluate this particular game that way.

On the other hand, sometimes that kind of thinking drives the development process, and when I step down from my throne of neutrality and ask questions like “but why is this supposed to be fun?”, they can only be answered by tracing the genetic lines of descent: “because it’s a tower defense game with RTS elements!”

My attitude is: if I have to know the thing’s ancestry to like the thing, there’s something lacking about the thing.

But that’s a digression (mostly), because Revenge of the Titans makes its own kind of sense (mostly). The look and feel have been crafted with care, and the gameplay rests pretty comfortably inside that aesthetic shell.

At first glance you might say this is visually “retro pixel-art,” but I’d say it’s something more durable, less nostalgist than “retro.” It’s art independently governed by the same aesthetic ideas explored in the pixel era: implicit orthogonal order, the reassurances of brick-like abstraction. Are Legos “pixel-art”? Are alphabet blocks? Moorish tessellations? Ancient mosaics? Yes and no.

Of course, on top of that, Revenge of the Titans is in fact passed through a layer of genuine low-resolution pixelization, which is hard to explain as anything other than nostalgia. But on my screen it hardly registered. The diagonals didn’t seem particularly jagged to me; had they been high-resolution crisp diagonals, I think it would have been exactly the same game.

(There are legitimate non-nostalgist functions for low-resolution, too, such as the menacing quality of imprecision, but that’s not really applicable here.)

The nostalgia element didn’t grate for me, I think because it didn’t really have a wistful component, or at least not a conscious one. The music immediately establishes the muddled spirit with a nicely done Wendy Carlos/Stanley Kubrick homage, the techno-classicalia here signifying only a) power and portent, tongue-mostly-in-cheek; b) the awesomeness cred of the homage itself. Yeah, hiding somewhere inside there is some nostalgia, but I don’t think the developer has conscious access to it as such.

Things I like about the game. It feels good: all the zoiping and gloiping is right on target. The amount of information onscreen generally matches my level of interest (i.e. no point values spewing from enemies, no status spreadsheets hovering over everyone’s head — mostly just zoips and gloips). Doing more or less what you intend reliably results in more or less what you intended, and then watching it all play out has some primal appeal (“the reassurances of brick-like abstraction,” as I said earlier).

The drama of the gameplay is meaningful. “Better get ready as best we can! Okay, here they come! Uh-oh, here they are!” Each of these stages has its own emotional tone and corresponding gameplay imperatives. This is the core of the game and it works nicely.

Things that feel like they’re not for me. Any game with a catalog element, from which you very gradually get to buy everything, always annoys me. Unfortunately this is a fairly common element in games! I’ve never liked the pressure and decision-making involved in actual shopping; I take no pleasure in seeing a sea of options after every level. I’d much rather have the new stuff doled out to me at some rate that the designer has deemed rewarding. Whatever the chef recommends!

Related point: I’d much rather have there only be a few tools in the game, with which I must work resourcefully, instead of an abundance of tools from which I’m encouraged to develop my own “style of play.” “Express yourself!” I know that some people like to say “Look at this wardrobe full of clothes! What shall I wear?” but a menu bar in a video game is never going to make me feel wealthy so I’d rather it not try. Constraints are what make games rewarding, not freedoms!

The amount of interstitial blah-blah-blahing about new enemies etc. etc. This is essentially a game with fixed gameplay from the start, not one that develops. The more protesting the game does about how things are supposedly constantly changing, the more it calls my attention to how much they’re staying the same, and makes that seem like a liability. Staying the same is okay! No need for all this briefing/debriefing cover-up. (Or else make it more interesting.)

I wish I could have zoomed in and out as a way of keeping tabs on the action, instead of scrolling around worrying that something bad is happening where I can’t see. That didn’t contribute in any way that I could relish.

The thing that made me stop. You carry over your amount of money from one level to the next. Eventually you realize you don’t have enough money to beat the level you’re on, because you didn’t play earlier levels efficiently enough. So you have to go back and do them again, if you want to proceed. But the levels are already all kind of the same; the only thing that makes continued play feel worthwhile is the modicum of progression through the game content that each level affords. I won’t learn any lessons by actually going back and retracing my steps; I’ve already learned my lesson in the moment I realize what I have to go back and do. What I want to do now is apply it while I keep moving forward. Unfortunately that’s impossible.

So I think I played enough. 4 hours always seems like a nice 2-movie’s-worth investment, appropriate for a game. I really went there and learned some of the language.

I wonder what kind of terms professional game reviewers set themselves. Longer than that, I should hope. If I was doing this full-time and being paid for it, I would feel obligated to see it through to the end. Sometimes the moment that most alienates you is just the pains of growing into the actual mindset the game rewards. Perhaps if I had pushed through I would have found my way to something even better. But I don’t want to be dangling that carrot in front of myself all the damn time anymore. Generally, if a thing is gratifying, it is in fact gratifying, which becomes an easy way of identifying such things and setting them apart. I never considered stopping playing Machinarium. This I considered stopping, so I did. There you have it.

No hard feelings. It’s a good game! But you know what they say: “I like ravioli, but I don’t eat it all the time.“