directed by David Lean
written by H.E. Bates and David Lean
based on “The Time of the Cuckoo” by Arthur Laurents 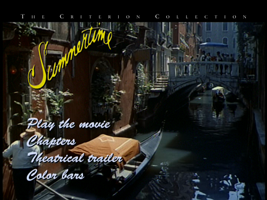 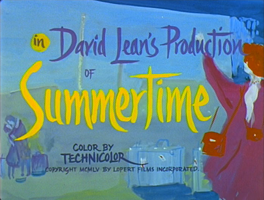 Whew, this was really a long time ago. There have been several times here where I’ve written about books nine months after reading them, but I don’t think there’s a precedent for writing about a movie so late. I believe I watched this in September 2010.

Which do we forget faster, books or movies? My instinctive answer is books, but I think that might be an illusion.

When it’s only a few weeks after finishing a book and all I can remember is the general feeling and a few disjunct details, that seems like a shocking act of forgetfulness to have perpetrated against all those words and pages and hours spent. And since there’s no content measure of a movie corresponding to a “page count,” I think I intuitively compare them in terms of time: a book is a 10-hour experience that I have managed to forget where a movie is just a 2-hour experience that I have managed to forget, which is why the book seems like a greater loss. But movies are actually much denser with content than books (by a factor of 10,000 x 24 ÷ your reading rate), the vast majority of which drains away almost immediately. I need to remind myself, here, that being able even partially to summon up something like this picture in my head is in fact a feat of significant memorization earned only over many years and many rewatchings, equivalent to retaining not just a sentence but several paragraphs. (And, let’s be honest, I still couldn’t tell you anything about the upper half of the image.)

SO: I probably forget everything at the same average rate.

More interesting and more mysterious is to try to identify what exactly has been retained. My recollected images of Summertime are of course quite vague in the most literal spot-the-difference sense, but I can still visualize the general staging and sense of quite a few shots. Let me count.

Well, my estimate is that the number of particular shots I can readily call to mind is somewhere in the 30-50 range. But somewhere in there I lost count because I began to wonder if some of these “memories” were more reconstruction than retention. Between “remembering” and “not remembering” is the wide gray stripe of “tricking yourself.”

I can also summon up a general aural sense of several of the main scenes — a subconscious impression of the music and ambient sound, and of the voices — but not of any particular moments in sound, or spoken lines. And revisiting actual kinetic motions is very hard for me — maybe five movements in the whole movie can be projected at speed in my inner screening room, and even they require hefty restoration to make them really move.

Sometimes when I am trying to fall asleep I challenge myself to really picture some motion that I know extremely well (a classic test case: the original Mario running, jumping and punching a block). I tend to find this very difficult, though not impossible.

Are these memory strengths and weaknesses typical for everyone or is this just my own profile? Comments are welcome.

Anyway, what was I talking about?

Summertime is the movie adaptation of the 1952 play “The Time of the Cuckoo.” (“Do I Hear a Waltz” is a musical version of the same material.) There might be some minor tweaks but it seems like the basics are the same: An American woman, middle-aged and long single, goes on vacation to Venice wanting to feel alive; is offered a chance at romance with a handsome Italian (married) man, after much protesting takes the chance, but then departs alone. Has she somehow changed her life? Has this been enough?

Oops, spoiler alert. Sorry. But I think this is one of those stories that only gains force when the end is known.

Katharine Hepburn, of Katharine Hepburn fame, has never entirely convinced me that I love watching her as much as TCM and the like inform me that I do. She has a metallic and gooselike quality — yes, thank you — that impedes sympathy. All that jabbing force seems like a defense and I get uncomfortable. I know that the idea in all those romantic comedies is that she is hard because she can’t count on love, “but don’t worry, she’s going to get the love she needs” — but I’m not so sure she will. Her hardness seems to go deeper than any movie happy ending can actually set right. It stems from beyond the script. But here in Summertime it all worked for me, more than it ever has, because this character’s fierce pride was revealed as both symptom and cause of a desperate, perhaps incurable loneliness. The movie won me over by acknowledging that Katharine Hepburnism is pitiable.

The people I know who act like Katharine Hepburn remind me more of the troubled character in this movie than of the timeless icon of stage and screen etc. etc.

The drama of the movie is of the risk of self-reliance vs. the risk of connection / the romance and the folly of pursuing “the genuine article” — and these themes are approached by a metaphor of tourism, which is an especially inspired conceit for a movie, since it means that the pure cinematography of Venice has real resonance. The sense of place is the point, moreso than the playing-out of the melodrama itself, and the obvious care that David Lean has put into the scene-setting pays off. It is a tasteful and thoughtful movie, but at such an unobtrusive and quiet level that the surface remains fairly conventional — which can be seen as either an asset or a drawback, depending on your taste.

David Denby’s essay for Criterion is a good one, but he starts by saying that the film exemplifies the “long-running idiom” of “the Continental lover”: the idea, soon to go out of fashion, “that Americans needed Europeans for sensual instruction.” This is certainly true to a degree, and yet the movie is really telling us that what Hepburn’s character is looking for could in fact be found anywhere, but that she is only receptive to it while on vacation, surrounded by her own ideas of beauty. It is made very clear to us — and to her — that contrary to the fantasies in which she has invested her own romantic feelings, Rossano Brazzi is just some guy who happens to be there; “the Continental lover” has no exotic authority after all. Only she can make the decision to open up, if she dares; it can’t be done to her by any amount of tall dark and handsome.

There’s a slowness and an old-fashionedness about the script and I felt a bit like I had to will myself not be indifferent while watching most of it. But having reached the end and suddenly felt its impact — which like the ending of The 400 Blows earlier in this project affected me by its genuine agnosticism: Dare we hope for this person? — I see greater depth in what preceded. I think a second viewing would actually affect me much more than the first did.

The opening credits are a stylish overture-in-paintings of her European travels thus far, set to sprightly music that I considered posting here but which has a few too many sound effects and no ending. The only real stand-alone track is this exit music version of the love theme, such as it is, known as “Summertime in Venice” in song form. There’s some wobble in the audio but oh well. Here’s your Criterion Collection track 22. Composer is Alessandro Cicognini, prolific in Italy (he was De Sica’s regular collaborator) but hardly any English-language films.