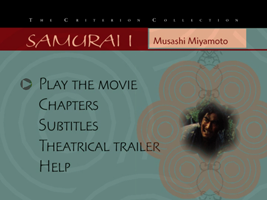 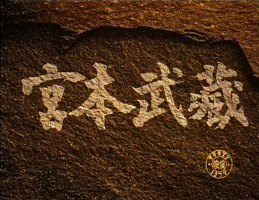 1. Title:
“宮本武蔵” = “Miyamoto Musashi,” the name of the hero (in standard last name, first name order). Musashi Miyamoto was a real person and is apparently fairly well-mythologized in Japanese culture (in part because of the book upon which these movies are based), so in Japan this title is probably as self-explanatory as, say, Robin Hood. Not so in the west, of course, so when the movie was released in the US (where it won the 1955 Academy Award for Best Foreign Language Film) it was called Samurai, which is a sensible retitling, at least for the time. The Musashi Miyamoto trilogy of which this is the first part was accordingly known in the US as the “Samurai” trilogy.

All well and good, but then Criterion goes and decides to release this movie under the needlessly roman-numerated and encolonated title Samurai I: Musashi Miyamoto, which to my ear is all off-putting geeky pompousness. This overcomplicated form of the title is not only on the packaging (and the website), but actually appears as the subtitling for the lovely four-character title screen seen above, where it feels blatantly wrong and ungainly.

I am going to call this movie Musashi Miyamoto, the first film in a trilogy of the same name. Like Back to the Future, or Star Wars (at least before they retroactively loused that one up).

3. Expectations:
Were very low. Especially knowing that the genre’s most beloved masterpiece had made so weak an impression on me, I didn’t think this would be my cup of tea ceremony (that’s a ‘before and after’). And the prospect of three of these damn things meant I was anticipating true tedium.

4. So:
When it turned out to be perfectly watchable, that felt like a lovely gift. Expectations are everything in this game! If all I had known about Seven Samurai had been that it was an old Japanese period movie, I probably would have been absolutely delighted by how much fun it was. But having been told that it was the all-time greatest movie of all time, I was underwhelmed. Here, not having been told anything other than that I was going to see some technicolor samurai, I had room to find my own fun in it.

5. Me:
Ain’t that always the way, with me — when I’m alone with something, I easily find that I like it. When other people and their opinions are in play, I don’t usually get there. I guess I find people and their opinions exceedingly distracting. It’s the instinct against roaming too far from common consent — in the interest of being sociable, essentially — that tends to ruin things for me. So when there’s no common consent, I am extremely likely to have a satisfying time. Most experiences manage to be interesting when I’m free to simply have them. The world is, after all, pretty interesting.

5.1 Others like me:
I know I’m not the only one like this — this is the same principle that drives lots of people to be obnoxiously passionate about the things they’ve found off the beaten track. In fact I imagine it’s the reason that we even have an expression for the concept of “off the beaten track.” What reason could there ever be for devaluing a thing just because it’s popular? People tend to imply that it’s an attitude born of prideful ego — “I’m better than most people so I should make clear that I like different things from most people” — but I suspect that more often it’s a feeling that arises because the social obligations implicit in the beaten track are numbing. Out in the wilderness you’re free to be yourself.

5.2 Let’s not forget though:
The movie that sparked this thought is after all in the extremely well-known Criterion Collection. I’m not very far afield here. Which just goes to show how little you have to wander off on your own before things feel entirely different.

5.3 And let’s be clear:
The point here is not that it’s all that great. The point is that I had a good time because I was alone. None of you have seen this, have you? None of you that I know, anyway.

6. Correction:
This movie is not in Technicolor — it is in Eastmancolor, which you know as the cheaper, fade-ier, 50s-ier palette that followed Technicolor. I don’t know what kind of color adjustment may have been done for this transfer — the night scenes seem awfully dark — but the tints on this old film don’t feel the least bit faded. The color is extremely vivid; green forests, blue skies, and red kimonos all flame like a retouched photograph on a postcard. It all seems to lean a little yellowish. Entering that color space is a good 80% of the experience, and I was able to relish that experience. That 50s color world evokes a satisfying balance of stodginess and innocence that I find endearing and grandfatherly. It feels muscular but only in the most impotent, comical, faraway way.

8. The disc:
Has nothing on it. I mean, it has subtitles, and it has the original trailer. That’s it.

9. Music:
There’s a full-Hollywood-treatment score by Ikuma Dan. It it simple and obvious and old-fashioned, just like the movie. I said about the Seven Samurai score that it was a sort of Japan-ified imitation of American standard practice; this one was hardly distinguishable from American standard practice, to my ears. In great part neither was the movie. This movie pretty much might as well be the cowboy movie that it might as well have been. This music seems never to have been released as a soundtrack; not recently anyway.

My idea with these ripped tracks is that in every movie, there’s always at least one chunk of music that’s meant to function on its own terms and have an equal share of the audience’s attention as the picture, if not more. Most often it occurs during the titles at the beginning or end (whichever is longer), though sometimes it’s elsewhere. This movie is no exception, but what’s unfortunate here is that there are no whole pieces that stand on their own — the opening title cue, our obvious choice, runs seamlessly into the first scene, which is full of noise. So in lieu of subjecting you to an awkward fade out, I have done a quick cut to the music from the very very end of the movie, which is tacked on here to provide a suitable conclusion. Luckily the movie ends with the same theme played in the same key — classical training at work, at its most reflexive!

The cellos are obligated to remind us about the whole Japan thing, but the theme is pure cowboy gold. Not a bad theme, as cowboy gold goes. You can rest assured that yes, he is indeed walking epically into an Eastmancolor sunset during that last bit. And I’m only slightly embarrassed to admit that I found those last moments stirring, in an entirely meaningless way.

10. Final thoughts:
Well, I have things to say about characterization and the genre and stuff, but I have two more shots at this so I feel certain that this is plenty for now.

11. P.S.
(He’s a wild young man who wants glory, he goes to battle, he becomes an outlaw, a priest sees his potential and gets him to start learning discipline, he heads off into the sunset to become a true samurai; along the way he fights some bad guys and meets some ladies.)