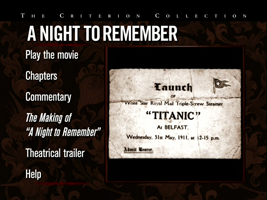 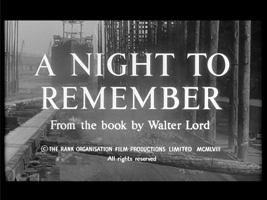 Not a film of any grand distinction, but gripping and effective all the same. The real life events are rich and upsetting, and all the film has to do is stay out of the way, which it does. The direction and acting are “restrained” and straightforward in the British style, but the resulting blandness here happens to be an asset – unintentionally, I suspect. The theme is man vs. death; we watch as the black water rises slowly, knowing that all these people are doomed, yet they irrepressibly go on being silly humans, chattering about propriety and nobility and inconvenience and on and on. So long as they can cling to their little ideas, they do. And so does the movie itself, seeming like a nice dull British movie about nice dull British people – which made the sense of impending horror that much more accessible to me. The audience instinct to shout “don’t go in there!” here manifests itself as “Don’t be the type of mild-mannered people who are in mild-mannered movies like this! You’re entirely unprepared for the elemental forces that are about to kill you!” That happens also to be the essence of our fascination with the story of the Titanic, I think, so this movie works out to be quite involving.

Part of me subconsciously was holding out hope that the passengers would be saved. When I caught myself feeling it, I was amused and surprised at myself, but there was no denying the feeling. I guess part of that is human nature, faced with any tragic story, whether or not it’s historically true. But I think here it particularly had to do with the blandness of the filmmaking. Since the movie never seemed to have an emotional agenda for me, it always seemed possible that the story and I might get to sneak away intact. James Cameron’s Titanic, by contrast, is so heavy on its agenda of epic-ness – the soundtrack always reminding us that “you are watching a grand tragedy!” – that it is impossible to hold out hope that anything other than a grand tragedy will happen. That movie was praised (by Roger Ebert, at least) for opening with a quick rundown of the historical course of events, to map out the story structure. But there is a huge difference between knowing externally to the film that the ship will sink, and knowing it within the film itself. Cameron (and Ebert, and everyone else) might have thought that starting a movie about the Titanic by telling us that it sank was just telling us what we already know, but it’s different to be told that your movie self knows it, too.

When we watch a movie we are always role-playing; the phrase “suspension of disbelief” hardly covers it. We are playing a game of make-believe at the movie’s request, constructing a make-believe self who knows only what the movie tells us to know. Of course, we always know more than that, but that’s exactly why we need the puppet self – so that we can negotiate between “we don’t know who the killer is, yet,” and “it’s so totally obvious who the killer is” and hold on to them simultaneously. Most movies are a series of implicit cues to the audience that map out what the “ideal audience member” is thinking. To interpret and follow these cues requires a certain amount of “theory of mind,” but there’s nothing sophisticated about it – generally even dumb people are very good at it. In fact, for many people, it seems like the false mind created on cue is actually nimbler than the real mind behind it. People who laugh heartily at clearly-cued but objectively unfunny jokes are demonstrating not their primitive sense of humor but rather their fine attunement to expectations. Their actual minds hardly enter into it, because they’re not called for. To take an example from the recent news – the people at political rallies who shout out scary stuff with fervor are not, I don’t think, actually expressing their true selves; they are just playing the part that the rally implicitly cues them to play. That may seem inherently ignorant but it’s not – it’s just like going to the movies, and it’s something we all do. But during a movie, all those fake minds are confined to chairs in the dark – bodies are shut down, as in sleep, to prevent us from flailing when we move in a dream – whereas during a political rally, they’re loose in the world and still capable of doing things. And those puppet minds are not to be trusted. That’s what’s scary.

Perhaps the defining distinction of the “art film” is that it attempts to address itself to the real mind and not the puppet. No cues, no agenda, nobody that you’re “supposed to be.” Would-be high-minded people are, after all, the only ones who complain about Hollywood movies being “manipulative.” As I said above, I certainly see the danger of the false self, and can sympathize with the desire to get away from cheap “manipulation.” But we must accept that role-playing is inevitable, with any work of art. An artist has to realize that his audience exists in the future, very possibly after his own death, and that they know things he doesn’t know. To engage with him they may well have to un-know things, and the only way to un-know is to begin afresh with a puppet self, a new mind. The movie that refuses to help its audience build a new mind may think it is abstaining from cheapness and condescension but it is generally just being stubborn and leaving the audience out in the cold. The strength of mind to watch as more than just the puppet is the individual’s responsibility, not the movie’s. From this point of view, refusing to give your audience cues is actually more condescending than manipulating the hell out of them, because it is based on the assumption that they need to be protected from manipulation, that they are too weak in the face of your art. Hollywood movies now, I think, lay on the manipulation as thick as possible because they trust that the audience has built up a substantial immunity to it. I guess in the earlier days of cinema, the audience probably was weaker, in that respect, because they weren’t as practiced. So perhaps there was in fact more of a need for the reserve and lyricism of Jean Renoir, or whoever, in order to leave the audience’s mind whole and able to engage. And perhaps our cultural sea legs are the reason why those sorts of movies aren’t really made anymore. We can all think perfectly straight after four drinks, so no matter how sophisticated a conversation you want to have, there’s no need to skimp on the booze.

That’s a passing thought and I don’t know if I buy it.

Anyway, that was all a digression. My original point was that A Night to Remember is far more emotionally effective than Titanic in regard to the central tragedy because it never tells the puppet about what is going to happen; it leaves that up to your real mind, which allows for a poignant dissonance. In Titanic, even the puppet knows all; the only thing reserved for actual emotional tension is the fate of the fictional romance-novel couple who have been Colorformed on to the historical backdrop.

Hm. Not sure that “puppet mind” stuff will make any sense to anyone but I move on.

The commentary, by two Titanic experts/obsessives (Don Lynch and Ken Marschall, who would go on to advise on Titanic) goes like this: “See those chairs? Those are exactly like the chairs on the Titanic, they really did a fabulous job with that. And see that railing?” etc. Other bonus materials make clear that producer William MacQuitty lavished a remarkable amount of attention on that sort of thing, for the time, so I’m sure he’d be gratified by their remarks. Walter Lord, the author of the original book, is seen too, and comes off as exactly the sort of person who might think that “A Night to Remember” would be an exciting title. I know I read the book in 8th grade but I can’t recall a thing about it; the title and the man behind it give me a hint as to why not. But I think I saw this movie then, too, and didn’t remember it either. I am not as stymied by superficial dullness as I was in 8th grade, I am proud to say.

Music, by William Alwyn, is perfectly decent and appropriate in the standard mold; nothing too assertive. Whenever “angst and struggle” music suddenly flies in to accompany the onboard chaos, it seems a little cheap for a second, and then you adjust. This is, after all, a movie. For track 7 of your album, I offer the Main Titles. Unfortunately, sound effects (of the ship launching) mar the first 30 seconds, but there were no completely unobstructed cues in the whole movie and this was the obvious choice, so you’ll have to live with it. Believe it or not, there are two separate recent rerecordings of this unremarkable main title, both of them, I believe, reconstructed by ear, the original score materials from most British films having been thoughtlessly incinerated. One is rather bad and the other is rather good.

This “watching the Criterion Collection in order” whim seemed doomed at first because it’s so stupid and endless, but I’ve been truly surprised at how much pleasure it’s given me so far. As playlists go, it’s got quality, unfamiliarity, and variety going for it. Scoring cultural literacy points is a bonus built in to many, if not all, of the selections. Overall, it seems more promising to me than my Netflix queue – and I made my Netflix queue, so that’s saying something. So, for the time being, I’m planning to keep it up. My policy solution for undesirable films is that I am perfectly entitled to skip any movie that I think will seriously nauseate me. I do not believe in “ordeals.” Tedium, with the right attitude, evaporates, but disgust is biological. I have my health to think of!

Incidentally, this is the second entry in a row on this site where I’ve opined that “blandness” is an asset to a piece of art. I’m not sure what that says about my current mindset. Something, though.