Hitchcock’s final movie. I’d heard that this was “a return to form for Hitchcock” and “slight but entertaining” and “a cute comedy-mystery” and the like. But it actually was pretty shameful stuff. That it was stupid was not really a surprise; what was sad was that it seemed actually sloppy, unprofessional. Hitchcock was very old and not doing too well by the time he made this, so I can’t hold it too much against him that it feels unpolished and vague; but Ernest Lehman was only 60, would go on to live almost 30 more years, and has no excuses. His screenplay (which Wikipedia tells me won an Edgar award for mystery writing!) is dumb not only in its larger structure but also in the details of each dialogue. Nearly every scene consists of two characters swapping summations of the current state of affairs, peppered with embarrassing less-than-double-entendres. When Eva Marie Saint says “I’m a big girl,” and Cary Grant says, “Yes, and in all the right places*” we cringe a little (don’t we?), but roll with it because it’s Cary Grant and he surely knows what he’s saying. When Bruce Dern says – oh god, something about peering into his crystal balls, or something, I’ve blocked it out – we cringe again, deeply, and this time, because it’s just Bruce Dern, we have no other recourse. My point here is that Ernest Lehman was always a bit adolescent when it came to sex, but at least in the 50s everything felt oblique to begin with, so a little snickering and turning red about sex seemed like just what the doctor ordered. Now it’s 1976 and it just seems immature that Ernie is still snickering and turning red. The movie revolves around two totally boring, low-chemistry long-term couples, both of which frequently resort to contorted metaphors and winking to talk about the prospect of potentially having sex. Which they do not, by the way, do at all in this movie, even off-screen, so the talk is just in there because Ernie felt it was mandatory. Which is also a bit sad.

There is a workable premise here, which is: our bumbling heroes are arbitrarily entrusted with the task of finding a long-lost heir to a great fortune, about whom nothing is known. Meanwhile, we the viewers find out that this long-lost heir is now in fact a nefarious criminal. What will happen next? From this premise, any number of things could happen that would be interesting, and I guess one or two of those things did ultimately happen, but they turned out not to be interesting after all.

Both the bad guy, William Devane, and his partner, the totally unsexy doofus-faced Karen Black, have more or less no screen charisma, though I’ll grant Devane that he has intriguingly weird teeth. Bruce Dern seems convinced he is playing a colorful character, and he certainly does do a lot of fidgeting, but of negligible interest to the audience. Barbara Harris fares the best, which isn’t saying much, by piling on the ham in her ham sandwich role. But wait, who are these people, again? A fake psychic and a cab driver and a what? Eh, forget it, I don’t care.

There is a pretty good runaway car sequence, shot more or less identically to the one in North By Northwest, but with somewhat better footage. But no music and no Cary Grant so it’s about even. There’s also one nice shot, a long shot of a cemetery, where two figures walk in parallel down different paths toward their convergence. It was interesting, but a little depressing, to find out that this one shot that struck me as attractive had actually been laboriously planned out by Hitchcock, with the paths specially constructed for the film, so as to suggest the lines in a Mondrian painting. Yes, I guess it sort of did look like that, but knowing how much thought and effort went into that one moderately interesting shot, I feel far less pleased by it. Couldn’t some of that effort have been redistributed into the rest of this silly movie?

Music is by John Williams, not quite so on-the-ball as with Jaws the previous year. The themes are cute, and harpsichord and piano on melody lend a certain 70s period flavor that I enjoyed. But as usual, he has a tendency to lay it on just a little thicker than he realizes – anyway, thicker than this eggshell of a movie can withstand. I had occasion to hear some of this music in advance of seeing the movie, and it primed me for something fun and dated, in the vein of the early Columbo episodes that Beth so enjoys. But Columbo, for all its sleepy hokum, has a certain degree of formulaic rigor. This just rolled around. Poor Hitch.

Covers of the first edition, and the pre-movie tie-in edition, of the book – is it possible that anyone, anywhere, has read this? – upon which. For those who are wondering, “Mrs. Rainbird” is the name of the rich old lady who wants her missing heir found. Now you see. 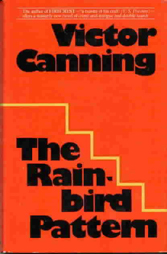 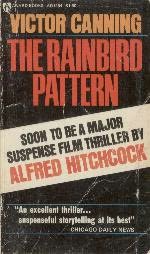