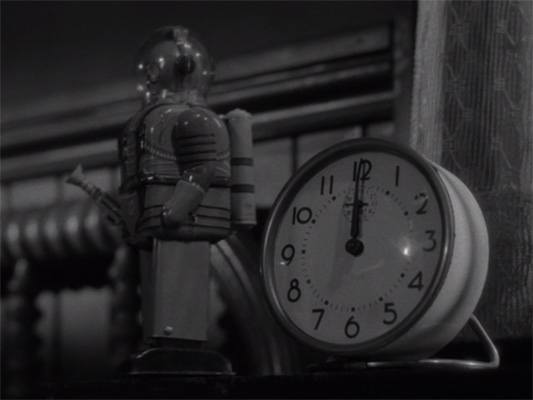 Watch it on Netflix.

This episode is overtly an “old-fashioned storytelling” episode, based on traditional tales: it’s a soupy blend of the “trickster vs. death” and “pure-of-heart vs. the devil” prototypes. It’s also a weak attempt at what I would call “the wry style,” as per James Thurber or John Collier, where deliberate clichés are propped up like paper dolls while the author smirks satirically. (You could also call it “the conspiratorial style.”)

Frankly it’s not a very rewarding episode. Both the wry and the folksy aspects feel affected and unconvincing, especially if you’ve ever encountered other stories in the same vein, which you certainly have. But as I said in an earlier post, the more unoriginal and mediocre something is, the more purely it conveys whatever deep prerational meanings are embedded in its tropes.

Basically: we’re the sweet little guy, the innocent, and Death is the rigid authority that we resist. It’s played as comic that Mr. Death appears as a petty bureaucrat, but it’s also supposed to make intuitive sense. The emotional self dreads coming up against brute rationalism in any form; facing mortality and facing an inflexible customer service representative are both forms of the same exasperating subjugation.

My personal philosophical position — you can expect to hear a lot about this! — is that all rationalism is social. That’s up to and including the “objective fact” of the inevitability of death: the authentic self, the Ed Wynn in all of us, says it will just have to find out about that for itself, thank you very much! But in practice, everyone has some limit to their sense of independent doubt, beyond which they accept the consensus.

When Death is depicted as a mere suit-wearing pencil pusher, it’s comedic because we doubt the authority of men in suits so much more freely than we doubt the authority of Death — even though from the point of view of the childlike Mr. Bookman within, they’re both equally just external impositions of a foreign will. Seeing the similarity through the difference, and vice versa, creates the humor. “Hey, maybe we don’t have to feel so mortal after all. What are we so afraid of? Murray Hamilton?” Comedy is about the joyful escape of the irrational from arbitrary rational straitjackets.

But the initial implication that this is going to be a satire at the expense of authoritarianism is a lie. The thrust of the episode ultimately isn’t comedic, it’s the opposite: the rationalist bureaucracy triumphs, which the audience accepts with wistful resignation as “ah well, not so bad after all.” We love humorless bureaucrats! We love Big Brother!

The plot is that Mr. Bookman tries to sneak through a loophole in the system, appealing for an indefinite stay of execution on the grounds of his unfulfilled dream of glory: a real dream, but an insincere appeal. He only mentions it as a gambit to wile his way out of his fate. However it subsequently unfolds that not only has he failed to game the system, but that in fact the system has secretly arranged it so that he gets to achieve his dreams. It’s seen through his insincerity, taught him an important lesson about selfishness (namely: if you’re selfish we’ll kill a little girl), and then, seeing him duly chastened, staged an opportunity for him to get the homely little glory he envisioned in his homely little heart. Now he’s really and truly fulfilled, and ready to die — a win-win!

The moral is: even your deepest sentimental fantasies fit comfortably into the system’s spreadsheet, because it’s a damn good system. Even humoring your attempt to rebel, to play the part of the trickster hero, is just another standard operation from the employee manual for Mr. Death, who luckily isn’t such a bad guy after all. Every spanking he gives you is for your own good, and every trick you think you play on him is just a charade for your benefit, which just goes to show how much he loves you.

… That is what happens here, right? Mr. Death smiles knowingly to himself as Bookman launches into his pitch, because this is his plan, right? And then, despite making a show of being hypnotically in thrall to the stupid pitch, and of being horrified at having missed his appointment, in the end his sudden calm reveals that it’s all been a performance for Bookman’s benefit. Yes? Right?

Yeah, probably, maybe, but it’s definitely a muddier point than it needs to be. It certainly doesn’t look like Mr. Death is acting. Frankly it feels like genuine confusion on Serling’s part. I think he contained both a “the little guy wins” and a “the little guy loses” impulse, and he just put them both in there, one after the other. This is a deep psychological ambivalence, and one I’m sympathetic to, but it’s the show’s job to take us on a guided tour of that kind of ambivalence; this just feels like a symptom of it.

I particularly don’t understand what goes on at the moment of crisis, at the climax of the pitch. Bookman proposes himself as a manservant to Mr. Death, to which Mr. Death says, ambiguously, only that he’s “a persuasive man.” Then Bookman seems to be right on the point of saying that he’s selling HIS SOUL … when he is saved by the bell. Or is he? Has a sale gone through?

His dream was to make a really big “pitch,” not a sale, and afterward they both comment on the quality of the “pitch,” the function of which seems after all to have been solely as a distraction. So has Mr. Death bought anything, or not? If not, what did it matter whether Bookman put his soul on the line? He’s already been told in so many words that he can’t offer up his life to take the little girl’s place, so whatever his sacrifice is, it’s something else.

Is it supposed to be like the binding of Isaac, where he only gets what he wants because he shows himself ready to give up anything, even to the point of horror?

How is his “soul,” or his “freedom,” or whatever he’s about to say, different from his life, in this context?

I don’t know. I’m befuddled by it. I think it might just be mud.

(Is it possible that the whole thing is a kind of parody of The Seventh Seal?)

Basically the episode is about wondering how considerately we’ll be treated by Death/fate/the bank/mom & dad/the government/any authority, and the answer is: “exactly as considerately as you deserve.” He knows if you’ve been good or not so be good for goodness sake. If you’re good enough, you’ll get to go “up there.”

The melancholy at the end is the melancholy of a child who subconsciously agrees that he deserves his punishment.

To me the most telling aspect of this script is that it doesn’t blink at all when it introduces the idea that the Bureau of Death actually has sentimental accommodations built in: that “hardship,” “priority,” or “unfinished business of a major nature” are officially recognized as grounds for granting a delay. This detail isn’t treated as surprising; the audience is expected to find this a totally natural conceit within the death-as-taxman trope. Which means that the outcome is a fait accompli. If we already intuit the brutal authority to be “y’know, not totally inflexible,” that means we are completely in thrall to it.

Lewis J. Bookman. Age: sixty-ish. Occupation: Pitchman.
Formerly a fixture of the summer. Formerly a rather minor component to a hot July.
But throughout his life, a man beloved by the children, and therefore, a most important man.
Couldn’t happen, you say?
Probably not in most places.
But it did happen… in The Twilight Zone.

“Beloved by the children and therefore a most important man” is completely insincere. That’s not what the story has really been about and YOU KNOW IT, Rod.

That he anticipates (and projects) our dubiousness says it all. Last time he said that the story could well be ours. This time he says: “Probably not in most places.”

I feel this as a cowardly sort of script, which starts playing defense from the moment Rod announces that it’s going to be about Death. My claim is that each episode dares something that discomfits us, and then eventually retreats from it; within that framework, this one is almost all retreat.

I had thought I’d say that the shadow/light ratio wasn’t applicable to this one because there’s no twist — everything that happens is telegraphed far in advance. But I guess there is a big reveal, and it happens in the second minute, when we are informed that the ominous black-suited stranger is Mr. Death and he looks directly at us. The rest is conservative authoritarian conventionality. So I’ll say this one has a twilight ratio of 7/93.

I’m here for the shadow; I think we all are. So this doesn’t give us a lot to work with.

No original score; the music all comes from the CBS library. But the majority of it is still by Bernard Herrmann, from suites of “Western” and “Outer Space” cues that he wrote in 1957. The shock chord for Mr. Death comes from an unaired pilot he scored earlier in the year. The dinky “street scene” music at the beginning is by one Willis Schaefer, not Herrmann. I know all this because a complete cue breakdown of every single episode is available online.

The ones with stock scores aren’t usually quite as musically satisfying, for obvious reasons, but the music editors generally do an impressive job of cobbling together something that feels cohesive.

If this episode has any emotional impact at all, I think it’s entirely attributable to the piece of music used at the very end, Herrmann’s “Starlight.”