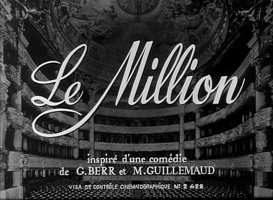 Le Million is the title in English too. I guess in 1931 Americans were still expected to know what Le means. By 1955, when the Les had to be stripped from Diabolique(s), we’d forgotten.

This movie was a breeze, so it ought to be a breeze to write up too.

It took me about half an hour to get in alignment. At first, my sympathy instincts just weren’t kicking in and I couldn’t feel where the center of gravity was. It’s a farce, but the leads aren’t really clowns, they’re just mild-mannered 30s folk. Charlie Chaplin always seems to have a giant arrow pointing at him; in Le Million it took a good while before I could see any arrows. I don’t know if I should chalk that up to a) me and my state of mind at that moment, b) the different social instincts of the 30s, c) the different social instincts of the French, or d) this particular movie.

But once the tempo picked up in the second half, I found myself on board, understood everything in retrospect, and easily went along for the rest of the breeze.

That’s a familiar experience to me, where exposition fails and bewilders me, but as soon as we get to the “rising action” I suddenly catch up. Since high school I’ve had the idea in the back of my mind: I’m not so sure that “exposition” is all it’s cracked up to be. There’s something artificial and overrationalized about it. Usually the first thing that the author actually cares about is the introduction of the conflict. In this case it’s: “A man wins the lottery but misplaces the ticket, and has to go on a wild chase to hunt it down.” That’s a real creative inspiration. But then the next step in the creative process is this artificially imposed grind of working out the exposition: “So, hm, who is he? What is his life like before he wins the lottery? I need to establish all of this first.” This isn’t inspiration; more like duty. And the viewer can always tell the difference. So many works begin with a dispiriting dutifulness.

In reading a book or watching a movie, I pretty much always have a sense of the order in which it was conceived. One always feel things open out and relax when one finally gets to the image or idea that was the author’s original seed of inspiration: “Ah-ha, now this is something.” When that seed is the ending, I generally have a sense of itchiness through the entire preceding narrative: “Yeah yeah, but why is this the story? Why would a person think to invent this?” Then I get to the end and go “ahhhh, now I see what this actually was; I see what you were trying to say.” But if I’m going to spend hours with a book or a movie, I’d rather those hours be spent with something being said to me than with something trying to be said to me or preparing to be said to me, something that will only organize itself into a feeling of human contact after the fact.

So that’s my line against exposition: if you have something to say, you do far better to say it than to try to properly render it said. This certainly is exactly the nature of my troubles with writing. Come on, man, be breezy, breezy!

Anyway, having seen the whole thing, now that I know the intended function of everything that happens in the first 30 minutes, I’ll be able to enjoy this movie much more fluidly on a second viewing.

It’s a very light-spirited, purely cheerful work. I’m glad to be able to add another movie to that stack, one of those things that is 100% clear-hearted and can only bring cheer. It feels a bit like a Silly Symphony, that way.

What’s the most recent all-happy movie you can think of? It just doesn’t seem to be done anymore; the world today has an angsty sense of being “beyond that.” I can agree that in Le Million (and Silly Symphonies) it takes a form that is very particular to the 30s and to which we obviously will never entirely return, but I don’t think the underlying spiritual idea is at all dated or “corny” or illegitimate. Artworks of utterly undarkened happiness are still as appealing and rewarding as ever; they’re just out of creative fashion. We’ve lost our sense of comfort with making such things, even though we’re still happy to watch the old ones and yearn for those quote-unquote “simpler times.” A self-inflicted wound.

Le Million is more or less a musical, which I think makes it one of the only movies I’ve seen from the very first generation of sound-film musicals. The one bonus feature on the disc is René Clair talking about the earliest days of sound — a good if short interview — and it seems like that’s the context in which Le Million gets discussed, as a case for Clair’s being an techno-aesthetic pioneer. I think it’s to his credit that I didn’t really take the time to think about the “inventiveness” of his sound techniques, because they just worked. (I did however make conscious note of the terrific special-effects shot with which the film begins, because it surprised me for predating the same sort of thing being done in animation, where I’m more used to it — compare the opening pan from Pinocchio, nine years later.)

The operetta-style treatment of the singing element has actually dated more noticeably than the technical stuff, I think, but I feel comfortable with it from Marx Brothers movies, which clearly are smirking a bit as they go through the musical motions. And yet just as clearly they’re not sarcastic parodies; they’re still inside of the tradition that they’re smirking at. Le Million felt similar: the movie certainly agrees with us that it’s a little funny that they’re singing. It just might not necessarily agree on the proportions.

A lot of what goes on here can be related to the Marx Brothers, most obviously the climax on the stage of an opera production, which seems like it can’t be a coincidence; it must have been deliberately lifted for A Night at the Opera. The best comic bits also have a flavor of Chaplin about them, like the situation when the protagonist, having sneaked onstage, is trying to be inconspicuous about tugging his jacket out from under a soloist singing a tragic death scene. I laughed hard at that. The attempt to get away with something impossible by “acting casual” is one of my favorite sources of comedy, and it was a mainstay of the silent era. I promise a full psychoanalysis of the phenomenon some other time.

I am struck that the musicals of this era, movie and otherwise, are still mostly unknown and are unperformed. It looks like the soundtrack from this movie has never been released in any form, despite being a cute little miniature operetta. So I ripped all the audio for myself. There are about 30 minutes of singing and another 20 minutes of incidental music (fairly prominent) in this 81-minute movie, which feels very generous.

Yeah, so maybe a lot of it’s kind of square and dumb (like the “we’re marching up the stairs!” song)… but then again, the whole spirit of the thing invites us to relinquish the concept of “square,” and I always appreciate that kind of invitation. Is Row, Row, Row Your Boat “square”? Do you really want to be the kind of person who says “yes”? I’m glad for the opportunity to put all that aside. The people onscreen certainly don’t seem worried about whether they’re being cool, so why should I be?

The score is credited to Armand Bernard, Philippe Parès and Georges van Parys; I can’t find any source that will authoritatively tell me how that collaboration breaks down. From googling, I glean that Armand Bernard led the orchestra (and is seen doing so at the opera in the film), and thus, I speculate, may have served principally as arranger…? Philippe Parès and Georges van Parys were friends who apparently genuinely co-composed many operettas and film scores, but van Parys also worked without Parès and never vice versa, so he may have been the prime mover. (We’ve listened to music by Georges van Parys here before, in rather a different mode.)

The music is mostly in a light operetta style incorporating “jazz” in only the most genteel French ways. Highlights include a six-minute tongue-in-cheek dramatic scene from Les Bohémiens, the make-believe opera seen in performance, which must surely be one of the most accomplished pieces of “fake opera in a movie” ever written, up there with the aria from Citizen Kane.

There’s also a complete love duet, “Nous sommes seuls,” which serves simultaneously as self-parody and as a genuine romantic number, with the vain heavyset opera singers played for absurdity against the artifice of the music and lyrics, but the hero and heroine having a real romantic moment, hidden in the pop-up greeting-card world of the stage scenery. The sequence, like the movie as a whole, is a heartfelt love letter to the very operetta inanities that it teases. It’s a brilliant scene, especially for its time.

I really would have liked to make our musical selection one of the many chipper little bits of comic-theater underscore, like this one, because I think they’re of very high quality as such things go, but none of them is quite entirely in the clear (the one just linked doesn’t have an ending, and then dialogue starts). So our official track is going to be the Main Title, which is just an instrumental of “Nous sommes seuls.”

Connection to the previous movie. This one’s solid: A couple has a cute romantic moment on a bench on an opera stage, surrounded by the touching quaintness of theatrical scenery, plywood trees and paper leaves. As you just saw. 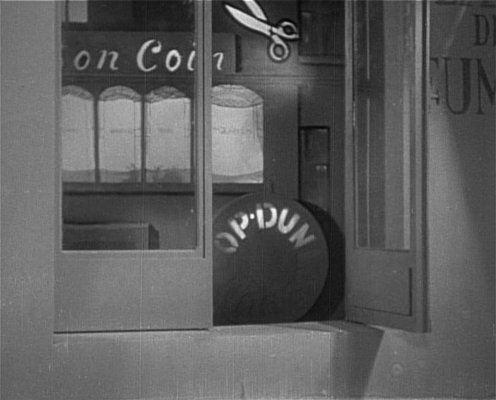