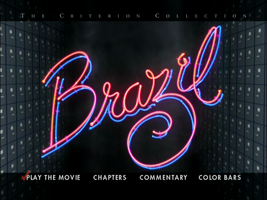 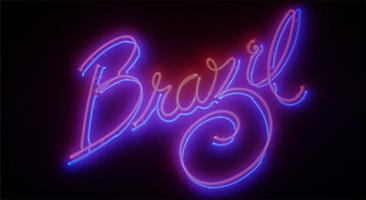 This is an old favorite that I’ve seen many times and endorse. I am mostly going to muse about the ending. Spoilers.

Gilliam says it’s a happy ending, which on the face of it is passive-aggressive sophistry. (“That’s right, if you felt as put-upon as I do, you’d think this is happy! Think of that! Just imagine how bad I must feel!”) On the other hand, he’s not wrong that Sam’s escape is legitimate on the movie’s terms. The movie’s two dreams — left (bureaucratic cog) and right (winged hero) — are equal and parallel. Forget the logistics of “Sam going to sleep and dreaming,” which the audience knows is just a mechanical device. Brazil is a diptych, a tapestry with two panels. The tension throughout is: how will these two dreams coexist? The ending is simply that Sam chooses the right and the camera chooses the left.

But cameras are privileged, in movies, so the slap-in-the-face punchline feels like a decisive vote for self-pity on Gilliam’s part, after 2 hours of a movie that sure seemed to be voting for exuberant creativity. His Munchhausen ends the same way… except then it doesn’t. Brazil really does end this way, but that’s not where its heart lives. Gilliam’s bitterness is always ambivalent, which can make it all the less sympathetic. If you know better, why don’t you know better? Underneath his giggling victim act, he’s actually an extrovert Romantic. He’s no shrinking Emily Dickinson, holed up with his notebooks and worry. Look at this big crazy movie! How can the guy who made this end by telling me that real life consists of being shackled and tortured in the 9th circle of hell? The answer is that he doesn’t really mean it, he’s just venting. Which is a frustrating place to end.

It’s the same as what I said about The Lord of the Flies — we can get a kick out of defeatism because we don’t actually believe it. It’s just spookhouse make-believe, Halloween. But Lord of the Flies is very single-mindedly Halloween, whereas Brazil taken as a whole is a full Mad Magazine’s worth of cranky glee, a wild grabbag. The final needle-jab of sarcasm is delightful as a single beat, but it isn’t necessarily the ending, and it’s claiming to be necessary. It’s supposed to be hard and angry and poignant. But couldn’t this all just as well have ended with the fold-in?

Maybe I’m giving the ending too much weight. But I’m not alone, since this is what Gilliam and the studio execs came to grief over. The bonus material relating to the fights with Universal fascinated me this time around, because I was shocked to find that the executives now sound pretty sympathetic to me. Wrong, but sympathetic. Underneath the battle of business is a battle of psychologies: Gilliam identifying fiercely with his ending of ghoulish self-pity, addicted to his own petty resentments; the executives unable to conceive of ghoulish self-pity as entertainment because their resentments are not petty: because for them this isn’t Halloween, it’s real. Brazil is a nightmare they cannot afford to have; it’s truly too close to home. For Gilliam it’s a nightmare he can afford to entertain, but that his bitterness refuses to allow anyone else to avoid. Both positions are defensive and nobody benefits from either of them. But Gilliam at least made a movie.

The 3rd disc of this 3-disc set is the outlandishly choppy “happy ending” studio edit. Gilliam’s movie of good faith hope that ends in bad faith defeatism is grotesquely forced to conform to Sid Sheinberg’s emotional outlook of unchallenged bad faith hope. This is the function of the standard Hollywood narrative: selling ourselves something we don’t actually believe deep down but are pleased to imagine that we believe because it seems to fit the bill. The real Brazil is something Gilliam really believes, topped off with something he is pleased to imagine he believes, perversely, because it’s such a downer.

But the good faith resolution — the real moral of the story — is, I think, there under the surface already. Sam’s escape would be a happy ending, if only the camera could be gotten to agree about its validity, or at least be agnostic. The studio’s request that Gilliam bring in clouds behind Sam in the final shot, which can be seen in the Universal version, is philosophically apt. But on the Criterion director’s cut, Gilliam reverted to the original shot: the credits roll over the torture chamber, unrelieved. Gilliam’s commentary track musings at this point exactly capture the knife-edge of his ambivalence. He seems to find himself saying, to his own surprise, that he thinks the clouds are great, that they are the correct ending… and then, apparently feeling self-conscious about contradicting his own choice, rationalizes by saying that he didn’t include them in this cut because one doesn’t need to see them: one feels what they signify even when they aren’t there. But in the very act of needing to talk this out, he seems to recognize that one doesn’t necessarily feel them. Only his ideal viewer will feel them.

Like all self-pity, his functions as a test: Are you the right kind of person? Will you be able to feel my real vulnerable emotion that I am expressing as its spiteful opposite? Can you tell that when I’m hopeless I’m actually hopeful? Gilliam doesn’t trust anyone who can’t tell. Except when he does.

Anyway, the passive-aggressive ending could very easily be purified if after the nasty reveal, we returned to Sam’s reality, with him triumphant and free. Why not?

The two dreams of the movie are one dream, to us. The movie tells us to embrace illusions and also to reject illusions. It loves fantasy and fears it. Is it good or bad to be lost in a hall of mirrors? Is it good or bad that life is an illusion? The correct dream answer is: both, always. In this respect, most of Brazil is right on the money: irreconcilably ambivalent. Like all the best movies, its narrative impulses eat each other and cancel out and meld and run wild, while its feelings roll ever onward. That’s art I can get inside. It’s only when this movie tries to get specific and say something that I resist it.

This was Criterion’s first really mega-super-deluxe-o set, with three discs, a fancy slipcase, a new director’s cut, and lots and lots of bonus stuff. It is, not coincidentally, also the very first DVD I ever bought. (I believe). At Tower Records in 1998. It marks the end of Criterion’s first phase of DVDs, design-wise, about which an entire tedious post to come — and thus it marks the end of my first phase of this project. I’ve watched 51 of these babies! Time to celebrate; stay tuned. It feels fitting that this last one is the one that’s been on my shelf, wherever I’ve lived, for the past 16 years.

Because the image on the old 1998 disc is “non-anamorphic” and Criterion’s later releases of the same set were much higher resolution, I figured I’d get the Blu-ray from Netflix to watch the main feature. But when it arrived it turned out not to be the Criterion edition but the Universal edition, with the original theatrical cut. So I watched that first, and then the director’s cut right after. No offense to Terry or to Criterion but the Universal version is a better movie. It’s tighter and flows better. The colors of the transfer are nicer, too, I think. But the Criterion bonus stuff is top-class. Nowadays they probably wouldn’t lean on “press forward to advance through these screens of text” quite so heavily, but for 1998 it’s excellent. Gilliam’s commentary is solid, the commentary on the crazy studio version is pretty astute, the two little documentaries are both good.

I particularly enjoy the relaxed video interview with the late Michael Kamen, the composer. This is a rewarding score that I admire. It’s thrillingly shameless — after all, how would restraint possibly serve this movie? It’s a big orchestra slopping all over the place and wrapping all the oversaturated fantasy in oversaturated musical fantasy to match. Much of the score is derived from squeezing the title song through Richard Strauss, but it’s really gloriously all over the map. Kamen is ready to savor every little thing, just like Gilliam, and it’s that willingness to really pursue self-amusement all the way to its limits that I find magnetic. I used to listen to this soundtrack album a lot in high school. It’s bizarrely put together and doesn’t make a lot of sense as a listening experience; yet at the same time, maybe for that reason, it is even more transporting than most soundtracks. It is another world, a weirdly two-dimensional one, on its own terms.

There is no real main title to speak of, and the end title is, of all things, a kind of nod to Black Orpheus, completely uncharacteristic of the rest of the score. So our selection is the signature cue, the one everyone remembers, the one you probably know as “Wall-E preview”: “The Office,” which Kamen says was inspired by Leroy Anderson’s “The Typewriter,” but obviously there’s a lot more going on here.

I don’t know if the marimba + electric guitar combo is original to Kamen or is lifted from some Esquivel arrangement or something, but it’s a stroke of orchestrational brilliance. More fundamentally, it is film-composerly brilliance to have recognized that in the vamp of “Brazil” was the potential to tease out this rising tide that would convey yearning and irony and hopelessness and inanity. The subtle poignancy of this cue encapsulates everything that Terry Gilliam is saying in the movie, and Kamen figured out how to say it efficiently and simply, all within the pre-existing song he was obligated to use. I spent many an hour as a teenager contemplating this cue and considering what it would feel like to have the aesthetic and emotional insight to realize that you could write this cue and it would work. That’s composing. I aspired to that and still do. Your track 51.