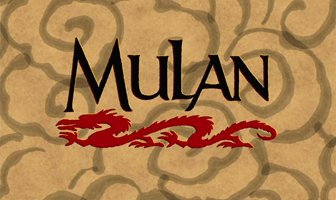 BETH It wasn’t bad. It actually was fine.

ADAM It picked up a lot in the second half, I think.

BROOM Oh, I’m going to say that it was bad, and that in the second half I really lost my willingness to humor it.

ADAM Well, I thought at least things were happening in the second half that were not creaky Disney “I wanna get out of this place” setup.

BROOM I thought the “I wanna get out of this place” was a little forced, but I thought the basic premise of this movie was not necessarily mishandled. But after it became action sequences and denouement it was all completely fumbled. That’s how I felt.

BROOM As you said, Adam: six Huns survive the avalanche, and then hold all of China hostage by showing up at the victory celebration and grabbing the emperor — it doesn’t make any sense. So the entire last act made no sense.

ADAM It was gripping.

BROOM It didn’t make sense literally or emotionally. The amount that she saved the day in the first climax was no less than the amount that she saved them all again later, so the turnaround of “now we accept her and will change our sexist ways” at the end — but not after the avalanche — was totally undeserved. The story didn’t earn us anything at any point after they got to the snow. And if the thing with the avalanche had been the climax of the whole movie, I would have rolled with it… but it was pretty stupid.

ADAM You have to admit it was pretty compelling when she moved the cannon suddenly off course, and you’re like “What are you doing??”

BROOM You already know what she’s doing, because you see her look up at the mountain.

ADAM I know — but if you didn’t know that, though!

BROOM Up to there, I was like, “this movie has some things going for it,” but after that I couldn’t do it anymore.

BETH But I found all of the ridiculousness entertaining. Yes, compelling. Who cared?

ADAM Beth, give us the woman’s point of view.

BROOM Yes, how did you feel about the feminism?

BETH I don’t really think of myself as a feminist, so…

BETH I just don’t like the label. I’m a woman.

BROOM Do you think it’s a feminist or a not-feminist joke, when the men are dressed up as women and he says “any questions?” and one says “does this dress make me look fat?”

ADAM This movie is obviously responding to the criticism of all the Disney heroines. It’s like, “Fine! You think that Disney heroines are passive princesses? Take that!”

BROOM She had almost no breasts at all.

BETH That’s true. The mom was not very prominent, though, because they didn’t know how to make a mom who was actually a nice person and well-rounded.

BROOM She was complicit in the subjugation-of-women sequence at the beginning. She was part of the problem.

BETH That’s true, but she wasn’t the evil stepmother, which is more of a character for Disney.

BETH They have never done, like, the loving mother. Have they?

ADAM I think Bambi might have had a loving mother.

BROOM The Rescuers Down Under had a loving mother.

ADAM Dumbo had a loving mother.

BROOM Yeah! That’s right. They, like, blew it out in 1941 and it’s never gonna happen again.

ADAM This movie did seem a little calculated to appeal to both P.C. critics of their female characters and Asian markets.

ADAM They prepared it in part to be successful in overseas sales, like in China and Japan.

BROOM And was it? Moreso than the ones where the characters were not so ostensibly Asian?

ADAM I do not remember, but if I recall correctly, they took some care to actually choose, like, an authentic Chinese legend. Editor, check on that.

[Ed.: Yes, the legend is authentic, but I can’t find anyone claiming that it was chosen as a business calculation. Apparently there was some hope at Disney that this movie might mend its relations with China, which had soured after the release of the Dalai Lama-adoring Kundun in 1997, which Disney distributed. China did eventually allow Mulan to be seen but it did not do well.]

BROOM It didn’t seem authentically Chinese in any way; it seemed completely contrived.

ADAM Having a dragon named Mushu played by Eddie Murphy is a giveaway.

BROOM None of it felt natural. It was embarrassing if you paid attention to it, so we didn’t. Right? Am I right?

ADAM Those ancestors really made me understand the concept of filial piety.

BROOM Why didn’t the stone dragon come to life? It didn’t make any sense.

BETH Why was it outside and they were inside?

ADAM Because it was so powerful.

BROOM And the… It was just all a crock of shit; there’s no getting into it. Was this movie better than Pocahontas?

ADAM Yes. There was better character development. Mulan was a character that you actually believed in.

BROOM Yes, Mulan was more sympathetic than anyone in Pocahontas.

BETH It seemed like different things were happening than usually happen in Disney movies, and that’s why I was okay with this movie.

BETH Such as gray zombie Huns coming to life.

ADAM Well, that happened in The Black Cauldron.

BETH Well, that was a good one!

ADAM The fussbudget pseudo-villain was not as gay as normal. That was good.

BETH Not as gay. But there were still references.

ADAM That was certainly the hunkiest Asian man I’ve ever seen.

BETH Who was somehow completely awkward around women.

BROOM Just to return to what was so terrible at the end: that the guys dressed up as women and shimmied up the poles like she had in training, and they played the music from before like it was all a callback, like it had all been leading up to this, which in no way was a payoff to any of those things. It was all forced.

BETH It just didn’t bother me.

BROOM That last sequence, I just felt like there was nothing onscreen that I could care about. Except for flashing colors.

ADAM She wasn’t that pretty. I mean, that was satisfying, right?

BROOM She was fairly pretty.

BETH She was pretty. Prettier than all the other marriage candidates.

ADAM And the other soldiers. But she was not prettier than, like, Cinderella.

BETH She was not the typical bombshell.

ADAM She was Asian.

BROOM I want you guys to say something along with me here — that to be accepting this shows that our standards have dropped exponentially.

ADAM Not as good as Dumbo.

BROOM How does this compare to The Hunchback of Notre Dame?

ADAM I thought The Hunchback of Notre Dame had a fearsome energy that redeemed its terribleness.

BROOM I thought The Hunchback of Notre Dame was mistaken from the get-go, and really terrible in lots of ways, but it was competent on some level that this lacked… Well, I mean, this was obviously “competent,” as work…

BETH I thought the backgrounds were nice.

BROOM I thought the animation was generally nice.

BETH I thought the CGI was eh.

ADAM I think these might have been the most generic songs since The Fox and the Hound.

BROOM They were bad; they were very undistinguished. But that one that we’ve been singing since we first saw it is really fun.

ADAM [singing:] “I know why I…” I don’t even remember the lyrics, but it sounds like every other Disney song.

BROOM [singing:] “Let’s get down to business / to defeat / the Huns!” That’s a terrible terrible song, but it’s done with gusto.

ADAM [singing:] “Did they send me daughters / when I asked…”

BROOM Wait for it…

BROOM And I actually kind of liked the “epic” musical cue when she makes the decision to go in her father’s place.

BETH I thought that was cool too, but it seemed strange.

ADAM The Hun punching through the snow! And the roof.

BROOM And the way the “I’ll Make a Man Out of You” sequence was directed, with a lot of awesome sword-swiveling.

BETH It was like Karate Kid, a little bit.

BROOM It seemed like it had some real geeks working on the animation staff.

BETH Just hearing us try to sing that song, none of us could find a note to actually sing.

BROOM I don’t know how they ended up with this Matthew Wilder guy.

ADAM “Mysterious as the dark side of the moon!” Can you sing any other song from it?

BETH I won’t be able to sing that one tomorrow.

BROOM [faking:] “Do your parents proud and marry a man, man, man!”

ADAM Can you sing “A Girl Worth Fighting For?” That was the most weirdly generic of all of them.

BROOM They were like, “You know that song the guys sing in South Pacific? They should sing that.”

ADAM At that point, why even do a musical?

BROOM Well, exactly. “Why even do” many of the things they did. Why put comedy in this movie? It didn’t feel like they thought it was funny. It was the worst comedy yet.

ADAM It was just the most half-assed.

BROOM I thought even the slapstick, which doesn’t have to necessarily involve writers, was terrible.

ADAM I thought it was funny when the cricket confesses that he’s not lucky, and Eddie Murphy asks the horse, “what are you, a sheep?” That’s pretty funny.

BROOM I’m not going to say “pretty funny.” I thought the first time he called it a cow for no reason was a little funny. Then he did it four more times.

ADAM Eddie Murphy clearly giggling all the way to the bank on this one.

BROOM Really? I think he walked to the bank stony-faced.

ADAM Do you think he was prouder of this than Norbit?

BROOM I don’t think pride enters into his equation these days.

BETH What about twelve years ago?

BROOM I think he has other stuff going on in his life.

ADAM This movie’s just not that memorable.

BETH No, but I wasn’t constantly looking at how much time had elapsed, which is always my indicator.

ADAM I was a little at the beginning.

BETH Yeah, maybe for the first fifteen minutes I was.

BROOM I never look at the clock. I find hating these things pretty occupying. I never think, “let it be over with!” I’m watching it the whole time, thinking about it the whole time, but it was pretty negative. So I think Pocahontas was worse than this, but…

ADAM Pocahontas was boring. This was just kind of a journeyman effort.

BETH Can we rank the last five?

BROOM They were Hercules, Hunchback, Pocahontas, and then The Lion King, which I think we agree was better. So just those four post-Lion King.

BETH So then it would be Hercules, Hunchback, this, and then Pocahontas.

BROOM I agree with that.

ADAM Clearly. And what’s next, Tarzan?

ADAM I think Tarzan is great!

BROOM Because he has the biggest pecs.

ADAM You thought Hercules was muscular! I think also Rosie O’Donnell is in Tarzan.

BETH Wow, that is harsh.

BETH Yeah, but it just doesn’t seem worth it.

BETH I just didn’t dislike it as much as that.

ADAM It was fine.

BROOM I respect you two for continuing to do this. 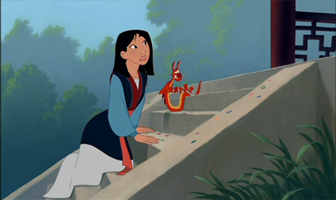 (yes, this is really the last frame of the movie!)