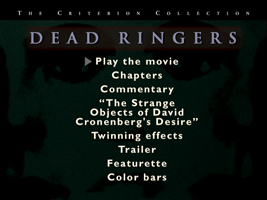 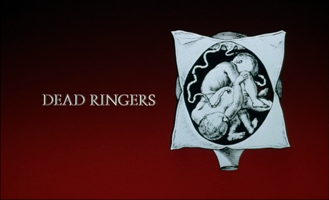 Jeremy Irons as identical twins played as queasy nightmare: I was really, really enthused about this premise. But the execution is pulpy, and that dampened the effect that I had hoped for.

It’s pulpy in that there is nothing here other than the ideas. The characters speak only about the premises and the plot; every peripheral detail (e.g. the images on a TV, the objects on a desk) feels very much placed and curated rather than genuinely incidental. There is no full reality here, just a complex of concepts. This all creates the impression of a pornographic motivation rather than a dramatic one.

A reductively focused script can work well in a movie that functions as a dreamy sensory experience. But for all its stylized production design, this movie wasn’t visually rich enough for me to see it as a heady unreality instead of as a rather insufficient reality. It was, at best, in a sort of uncanny valley between the two. I suppose it’s possible that David Cronenberg relishes exactly that double-insufficiency. Such an impression of thinness can enhance the sense of horror — pornographic impulses feel unsafe and suggest the monstrous (fetishes being essentially social mutations) — but to my mind, there’s no getting around the fact that it diminishes the work.

In the middle third, the concepts get their full exposition and we are drawn into them — and for a while there I thought maybe my diagnosis had been wrong, and that the ideas alone were in fact enough to sustain the whole undertaking. But in the final section, the pacing felt clearly wrong — once we can see that our trajectory is downward into darkness, we are ready to skip to the end, but the movie prolongs the descent, seemingly in the interest of savoring the “story,” which is an impossibility because there is nothing there. Had we developed a richer sense of this world, the slow burn would be fascinating rather than annoying.

However, having carped, I will now return to my initial enthusiasm, which was based on a quote from Cronenberg that I read before watching: “Dead Ringers is conceptual science fiction, the concept being: ‘What if there could be identical twins?'” Even now, it still excites me to read that. Yes! The movie equivalent of saying a common word until it sounds weird and wrong! There should be a whole genre of horror based on defamiliarization.

An eerie pair of cold, brilliant twins who think of themselves a little too much as being the same person is a fantastic idea. And their scenes together really are very effective in the matter-of-fact way they blur the line between being the inner monologue of a single character and an encounter between two opposing individuals. That aspect of the movie I can wholeheartedly endorse. The rest — gynecology and horrific surgical tools and drug addiction and all that — is less markedly inspired. If these aren’t your hangups (and they aren’t mine), the relationships among the elements can seem pretty arbitrary — just a few items chosen off the long list of “icky” stuff David likes to think about.

When he and others talk about the serious issues inherent in the icky fascinations of his movies, there’s no doubt that they’re right — there is potential substance behind the ick. But the pertinent question is whether the movies themselves are actually delving into that substance, or are just indulging themselves. The stuff in this movie all felt like the indulgence of nerdy fetishes — wherein intellectual associations are an equally superficial part of the overall superficial appeal. (Not unlike, say, steampunk.) The opening credit images, in the style of Renaissance medical illustrations (see title screen above), set the tone: cool as design because of the aura of learnedness.

The movie’s emphasis on gynecology (and the pointless plot element that Geneviève Bujold has an unheard-of mutation in her anatomy) seems particularly puerile to me. I gather that the movie is particularly horrific for women to watch because of the gynecological associations. But I’d venture to guess that the gynecological content is here solely for how it might strike men as creepy, and that ultimately this movie is fairly indifferent to the perspective of actual women, for whom the female genitalia do not have any particularly alien connotations (or shouldn’t, anyway). And I’m all for defamiliarization horror, but come on! — basing it on vaginas is way too easy to be interesting, says Dr. Freud.

(I was about to type “like shooting fish in a barrel” but after running it through my unintended-meanings alert system I got “proceed with caution” so decided against it. Here it is in parentheses instead.)

On the commentary track, Jeremy Irons points out that though playing twins might seem like a demanding trick, the feat of acting is not all that unusual — managing two different characters at once is a skill from doing theater in repertory, and playing to an imagined partner is what happens in all reverse angles, in film. True enough. What’s most impressive about his performance is how very very similar he allows the two portrayals to be: it gives a sense of close-up magic to the endeavor. He says at one point on the commentary that he thought of the more confident alpha twin as being centered in his forehead, and the beta twin as being centered in his Adam’s apple. I think hearing that nifty little tidbit of technique may have been my favorite part of this whole viewing experience.

Geneviève Bujold seems undertrained for this sort of thing — too naturalistic to seem at ease in this very un-naturalistic movie — and there is the sense that this sort of woman would never, ever, ever, ever actually be interested in prissy icebox Jeremy Irons… but the presence of a person just sort of walking around onscreen being herself in the middle of all this clinical weirdness is itself interesting to watch.

The other girlfriend is no good.

Music. Here’s the main title. This is pretty good work on Howard Shore’s part; definitely superior to his prior showing here. I actually liked it much more before I listened with headphones and realized that each of the four notes in the main figure is repeated, and that the harp articulates absolutely every beat. I had thought I was hearing something extremely still and simple, which was more compelling to me.

It sounds like there’s terrible hiss, but I believe it’s an intentional effect created by the synths in the instrumentation — the soundtrack of the movie was very clear, as you’ll hear at the very end of this cue when a door clicks open to start the movie. (There was an uninterrupted version of the same theme at the end of the movie, but somehow it wasn’t mixed as well, and tacked on to it was a long, long dull vamp to run out the credits, so I picked this opening version instead).