Improv comedy purports to be something like on-the-spot writing – and maybe it is, in its way – but it feels like something else. Improv comedy tends to come off less like creative play than like the shuffling of pre-existing cultural molecules – what the kids today call “memes.”* Since the performers need to be in agreement during the unpremeditated performance, they’re forced to depend on strategies that they can be sure the others will “get” instantly – on concepts that are common property. Anyone watching improv is also there to appreciate the craft – the comedy itself is generally pretty pale when taken on its own merits – and for the most part that craft is the clever invocation and exchange of these existing notions. In this sense, memes, and the shared repository of memes that constitutes our common culture, are exposed in a particularly naked way during improv.

See, when I sat down to write this, all of the above felt like it would take about one sentence. But then I couldn’t figure out how to write that sentence and it turned into a whole paragraph. Very frustrating; the whole rhythm of my overall thought is thrown off; that was supposed to be the upswing but now it’s turned out to be the first movement, and I really don’t have the time to keep it up through what will apparently have to be a very long arc of speculation.** Let me try to just suggest the rest of what I wanted to say with a series of questions:

Is this (the shuffling of pre-existing cultural molecules) really any different from “real” creativity, or is it just a rougher-grained version of the same process? If these molecules (those that might be invoked during improv comedy) could be catalogued in a dictionary, approximately how many would there be? Do they really exist as discrete molecules in a way that such a dictionary is feasible, or are we tricked by our sense of recognition into thinking that they have Platonic existences outside of their specific usage, when in fact we are only recognizing rules of formulation (that is, recognizing individual snowflakes as being well-formed snowflakes and thinking this means we must have seen them before)?

If such a dictionary could be constructed – not only of comedic memes but of all dramatic (mimetic!) memes – could a grammar be specified to govern their usage? It certainly feels like such laws, or at least principles, exist – it is the elegance and charm with which these memes are deployed that we appreciate while watching improv… or reading a mystery… or taking in any form of art that does not attempt to disguise the fact that it is constructed from pre-existing molecules – and such judgments necessitate principles of taste, as well as underlying formal principles.

Listening to music, one often feels the same sense of continuously recognizing constituent gestures – “now he’s doing one of those; now he’s doing one of those, etc.” – but my efforts to isolate and catalogue these have failed instantly because the things are devilishly hard to disentangle from one another without them losing their essentials. Is that a case of the snowflake illusion, or is it just a difficulty arising from our poor ability to articulate the workings of music? Perhaps an attempt at isolating such things in spoken/dramatic culture is a more approachable precursor to determining the form of a musical equivalent.

Everybody likes concrete examples, so here’s a concrete example to finish. The other day an obscure movie that I haven’t seen was being described to me. In this movie, a man seeking to immigrate to the US tricks a woman into believing that he loves her so that he can marry her for his citizenship. Then, before they reach the border, events ensue such that he actually does fall in love with her. Then, at a crucial moment, while the man is elsewhere, a third party shocks the woman by revealing that he never loved her and was only using her – even though now he really does love her! When I was told this, I thought, “Well, sure, right. One of those.” The question is, one of what? Have I actually seen this snowflake before? My gut tells me I could make a lexicon of these and that such a lexicon is sitting in my brain right now. A commenter on this site once suggested starting a wiki of all memes, but before that process begins, a coherent theory of how they break down needs to be established.

* Long note on “meme”: I don’t like this word “meme” for what I’m talking about because the emphasis, as it was coined by Richard Dawkins, is on the fact that, in analogy with genetic information, such an idea propagates itself from person to person and is thus subject to principles of adaptation and evolution. What I want to talk about is the notion of a unitary cultural concept that is shared by many people, but without this emphasis on propagation, which is a limiting metaphor. After all, culture (and the molecules thereof) is not solely transmitted from person to person; concepts can, for example, lie dormant in books and films and whatever for years and then be picked up again by a new generation, now colored by all sorts of historical considerations. Or they can be disseminated to millions of people all at once on television, where in some ways they don’t really seem to their audience to have originated with humans at all. These kinds of events can no doubt find a place in a pseudo-genetic theory of human culture; my point is just that such theory shouldn’t provide the terminology for the culture itself. Meme essentially means “a unit of imitatable thought” when I want a word that means “a molecule of cultural convention.” Coin and suggest!

For your reference… Since my OED privileges have been wiped away, here’s the – ugh – American Heritage Dictionary on “meme”:
n.

A unit of cultural information, such as a cultural practice or idea, that is transmitted verbally or by repeated action from one mind to another.

[Shortening (modeled on GENE) of mimeme, from Greek mimēma, something imitated, from mimeisthai, to imitate. See mimesis.]

** When I started, promising only to write one paragraph, Beth said, “You’re writing a one-paragraph entry on memes? That’s not possible!” And she was right.

I was just now looking at this page from Vertigo. This is when Jimmy Stewart is pulling Kim Novak out of the bay after her apparently ghost-induced apparent suicide attempt. 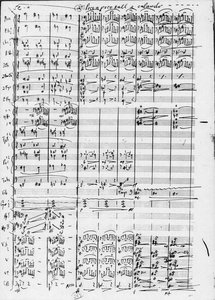 In the first two bars here, the strings and horns are trading off a little whiplash figure in sixteenth-notes while the rest of the orchestra plays nauseous chromatic scales. Then, at the double bar, the figure in sixteenth-notes becomes a figure in eighth-notes and is played by the strings and winds together. Herrmann’s idea, I think, is that the frantic moment is beginning to subside, so the rhythm is altered to be less wrenching. But to me this sort of switch – from sixteenth-notes to eighth-notes – is a little unnerving in its own right. The motif itself, as it passes from one rhythmic speed to another, is revealed in a disturbingly naked sort of way. I was put in mind of something similar in Janáček’s Sinfonietta (the only work by Janáček that I’ve heard enough times to hum – but my sense is that the basic technique is found in many of his other works as well). Janáček’s overall approach to composition seems to deal, like Herrmann’s, in discrete units of musical material: musical objects that one hears being altered, played with, and rearranged, but in a fabric where the seams are always turned outward. The patches of material do not melt into one another; they remain distinctly movable within the larger context. In Herrmann’s film music the short, repetitive packets are first of all useful for communicating to an audience listening with only “half an ear,”* but they have their own peculiar character, as well.

The particular strangeness that I find in Janáček and Herrmann has something to do with this foregrounding of musical figures as manipulable items. When individual musical items are so discrete and item-like (itemic?), they begin to be disturbing. The principle is the same as with Yves Tanguy: 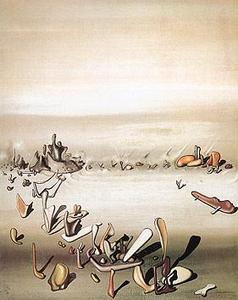 Because these smudges and blobs are portrayed as objects, we are confronted with all the uncomfortable ways in which they do not live up to their responsibilities as objects. “What sort of horrible fucked-up objects are these?”

If it’s handled a certain way, the substance of music begins to take on the same, queasily insufficient quality. If musical motifs are “figures” to be handled and altered – are, in essence, things – then what sort of terrible off-world do they come from? Of course, that response is never conscious or nearly so stark. In practice, something like this Vertigo moment, which bluntly exposes the “material” quality of the material (to my ear, anyway), would just create a mild sense of oddness. But that’s plenty.

Why ‘change of rhythmic scale’ is what sets me to hearing music this way, I’m not sure. A visual analogy is tempting: it’s like moving the camera, pulling back from or zooming in on an object. The features that remain coherent and undistorted are more readily identifiable as an object and not just as a feature of the background. A parallax sort of thing.

Well, anyway, all those discrete musical “cells” can get unnerving in Herrmann. The technique flirts with clumsiness but the end result is something much more ominous than clumsy. Bartók also sometimes strikes me as having given his music the power to disturb by veering toward clumsiness. “Rough” is probably a better word: not a roughness of sound but a roughness of manipulation.

I recall being transfixed by a not-very-good piece, David Del Tredici’s Tattoo (1986), because of how viscerally uncomfortable it was making me. The whole piece is a huge, much-too-elaborate fabric built out of spiraling iterations of a single rhythmic figure that’s a sort of spiral in itself. The little thing appears in constant juxtaposition with itself on various scales and at various speeds. This is Del Tredici’s big technique, or was in the 80s, and he used it to death in all his works, so far as I can tell. It’s sort of the shameless, aggressive version of what I’m trying to point out in Herrmann and Janáček, and in that particular piece it really made my skin crawl. Really, like nails on some existential blackboard, like the guy in Sartre’s Nausea. I’m not sure if that’s what Del Tredici was going for – my explorations into his other music turned up a lot of grotesque self-indulgence and some other distasteful qualities, so it’s hard to guess what he wanted to achieve – but I give him credit for it.

The gothic, morbid qualities of Vertigo and Tristan und Isolde before it seem to me related to this sense of being confronted with the uncanny “stuff” of music, but that’s a different thought for another time. But there, I said it anyway.

* This is someone’s line about film music but I forget who. Aaron Copland or someone like that.